Yesterday we had our farewell party. We had invited about forty people thinking that half of them were surely away on vacation, but incredibly enough, almost everyone came. We had also counted on fine weather for a garden party, since it has been hot and sunny for eight weeks. Incredibly enough, it rained all day yesterday (needless to say, it’s sunny today again). I guess heaven was crying. Don’t cry over me, …

It is sometimes said that the hostess should not enjoy her own party, but I did. The guests were crammed into the rooms where we had squeezed in two sets of garden furniture, a spare kitchen table and an array of chairs and stools. I think there were seats for everyone, but there was continuous shuttling into the kitchen to fill the plates. Our two youngest were wonderful and saw to it that everyone got food and drink so that I could rotate and have a word with everyone. We had never had a party this size before. We have enough food left to last until we go, but the cakes were wiped off in two minutes. And Staffan had said we didn’t need any cakes! I know our friends better than he does.

This morning we discovered that one of the two old plum trees had been blown down. They were there when we bought the house and gave us the most tasty plums year after year. The children used them as a soccer goal. At one time, the grass between them was totally worn out. But we always allowed the kids to play on the lawn, that’s what lawns are for.

Now one of the trees is gone. Staffan and I cut it into small pieces and threw into the wood across the street. 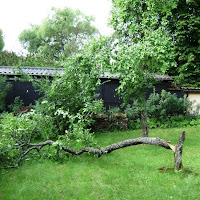 Posted by Maria Nikolajeva at 14:57