Do I miss Cambridge? Yes and no. I miss the community, my friends and colleagues, my students, seminars, college lunches and dinners... and I have to remind myself that none of this has happened in the past year and a half. So what I miss is in the past, not what I am missing now by not being in Cambridge. I know it sounds awful, but, to put it cynically, I haven't missed much. What I valued most in Cambridge has been severely reduced. To put it even more cynically, I am glad I left Cambridge when I did.

In the first year, I still had some ties with Cambridge, supervising a few PhDs for a miserable remuneration. Online supervisions that were extraordinary in the beginning soon became routine for everyone so I didn't even feel I was particularly isolated. I stayed in touch with some colleagues, but eventually what is going on in my precious baby, my Research Centre, is no longer my concern. I don't know the new cohorts of graduate students, and they don't know me. They are likely to know of me and are probably assigned some of my work, but I am not a person anymore, just a name. And my former students have moved on, have jobs and families, and I see them occasionally on Facebook. Every now and then, Facebook sends me a "memory" of a doctoral defence or a graduation ceremony.

I have been allowed to keep my university email address, and I am still getting messages from various committees that have forgotten to take me off records, and I am getting lovely messages from my college supporting its members in these difficult times. I have participated in a couple of zoominars, but that, too, feels less and less relevant.

The main reason Cambridge has become a ghost is my firm decision to withdraw from academic life altogether. If I had been still active as a researcher I would have participated in more events, made myself available for supervisions and assessments and at the very least kept track of what is going on in my field in general and in my former research environment in particular. As it is, I have moved on so far away that sometimes I am not even sure that Cambridge has really happened to me, because the person I have become in these two years wouldn't find academic life attractive. I do remember of course that the person I used to be valued her academic career and enjoyed academic life with all its horrors and rewards. But that person is no more. 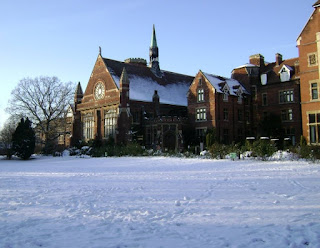 Homerton college on a rare occasion of snow

Posted by Maria Nikolajeva at 18:13 6 comments: