The ironing board that I brought from the old country broke down. The cover started oozing some fishy liquid that damaged the clothes, and the board itself crumbed into tiny particles that spread all over the utility room and beyond. Reluctant as I am to throw things away, especially the faithful things from the old country, I planned to get a new cover, but never got round to it. Staffan took the initiative and bought a new ironing board at Tesco. I don't think he ruined the family's economy.

I don't normally iron a lot, apart from an occasional skirt or blouse, but I do iron table cloths. I love the crispy touch of a newly ironed table cloth. The thing is, when I have washed one after a fancy dinner, I never have time to iron it and so store it away after a few days or weeks, and when I want it again for another fancy dinner I always discover that it needs ironing. This is how I inaugurated the new ironing board today.

I couldn't help feeling sad about the old one, waiting in the garage to be transported to the dump - sorry, recycling station. Sooner or later, things from the old country will be replaced. When we no longer have any appliances with European plugs I will feel truly naturalised.
Posted by Maria Nikolajeva at 13:24 1 comment:

The Faculty secretary has asked us to indicate exactly which days in July-September ("research period", not vacations) we are available to be contacted at home and which days we are definitely out of touch. I have long ago stopped being amazed at the local customs, so I ticked the appropriate boxes and sent in the form thinking this was for statistical or whatever other purposes. Not so. I am a member of the Senior Management Team. I have been allocated a week to be second in turn to lead the Faculty in case of emergency.
Posted by Maria Nikolajeva at 16:52 1 comment:

In the English Garden

Last Saturday we went to the University Garden Party, celebrating the 800th anniversary. There had been much ado about the tickets, since there were "only" ten thousand of these, and it wasn't on first-come-first-served basis, neither professors first, but completely random choice on application, no more than four tickets per employee, and only immediate family. (I did hear later that there were merely 8,000 tickets applied for). The venue was Botanic Garden. You were supposed to inform the organisers about your transportation - clever, just imagine ten thousand people trying to park by the Botanic Garden. You were also supposed to bring you id. The instructions further included prohibition to climb trees, but encouragement to bring alcoholic beverages "in reasonable amounts".

This sounds absurd, but I wouldn't miss a party that is only given every 800 years!

On arrival - after id control - we were given a blue picnic backpack with university logo, containing, as promised, sandwiches, fruit, cake, crisps and some fishy power drinks. We had our own alcohol in reasonable amounts. We managed to find a picnic table and chewed our crisps for a while, surrounded by people of all ages and nationalities, with whom Staffan tried to make conversations in their languages, to their dismay. On consulting the program, we stated that there would be a choir perfomance and a brass band performance, but we could do without face painting or plant pressing. During the brass concert, small flags were distributed, featuring all college crests. The audience, sitting in small groups on the lawn around their picnics, waved the flags frantically. Some people were genuinely worried that there wouldn't be enough flags for them.

We never used our free coffee vouchers. (Frankly, we never ate the sandwiches nor drank the drinks. We brought them home for the kids).

In the bus queue on the way home, there were many blue backpacks. I bet we'll be seeing them everywhere for a while.
Posted by Maria Nikolajeva at 17:20 1 comment:

There are recurrent moments in my professional life when I wish I did something else instead. Every now and then I publish a book, and each time I have to compile an index. There is software available for indexing, and every publisher warns against using it. Quite right. An indexing software doesn't know that "princess" can sometimes be a literary term, but not all princesses should otherwise be in the index. It cannot figure out that when I am discussing reading and writing, the leading word should be literacy, nor that "masculine" and "feminine" are aspects of "gender", while mothers and fathers are parents in the context. It cannot conceive of metamorphosis being a title as well as a notion. And it surely cannot distinguish between C S Lewis and Lewis Carroll. Anyway, publishers require that authors compile indices manually. They don't do it themselves because it is incredibly time-consuming and would cost them a fortune. Once I was so totally busy at the time when indexing was requested (and as anyone who has published a book knows, proofs and indices always arrive when you least want them, for instance when grandchildren are visiting, and I have a pile of theses to mark) that I asked the publisher to do it and deduce the costs from my royalties. This was the most useless index I've seen.

Therefore, every time this happens I swear solemnly to never, never ever write another book.
Posted by Maria Nikolajeva at 09:10 2 comments:

Two of the grandchildren are visiting. On Saturday, I went to Heathrow to pick them up. Remembering my experience of being stuck in a train for an hour, I have a wide margin, but this time half of the underground lines are closed. Not Picadilly line to Heathrow though, yet it does mean more crowds. The flight from Sockholm is half an hour early, so I barely have time to grab a cup of coffee.

Filip is an experienced traveller and has seen the major London sights with me. Viktor has never been to London and has some vague ideas of what is available. I decide to take a sightseeing bus to cover everything there is to see at one go. The guide comes with a lot of sophisticated jokes that are wasted on my companions. Eventually it gets boring, but by this time it is too late in the afternoon to go to any of the attractions (Tower or Madame Tussaud), so we take a boat trip under light drizzle, admire Platform 9 3/4 at King's Cross and make our way to Cambridge.

I have not prepared too well for the visit, but I know there is a fair on Sunday. We got a glimpse of it on the way from the railway station. Now, the boys are spoilt by the huge grounds in Stockholm and Gothenburg, and I warn them so that they aren't disappointed. But actually the fair is not bad. There are rides and games for all tastes (some are of the kind that make me sick by the very look of them), food market, flea market, ice cream, candy floss and a stage with very loud music. People have picnics sitting on the grass. The boys can do what they want - this is what grandmothers are for. I just remember to keep some change so that we can take a bus home. They get hamburgers and soft drinks for lunch. They win soft toys. As the very last treat, we buy a flea-market croquet set. This is a strike of genius. The rest of the day back home in Milton is saved.
Posted by Maria Nikolajeva at 08:29 No comments: 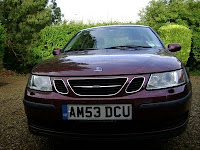 This is my new car.

No, this is my old car with new licence plates.

Now nobody can see that I am an alien.

On the other hand, I still have the wheel on the wrong side. 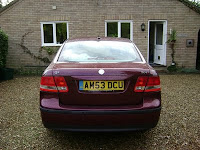 Posted by Maria Nikolajeva at 20:15 2 comments:

I spent this weekend in Bristol, at a conference devoted to Diana Wynne Jones. It is not common to have a whole scholarly conference on one single writer, at least not a living writer (there are surely tons of conferences on Shakespeare). The huge advantage is that everybody knows what everybody is talking about. You don't have to give a plot summary or explain who is who and how the story is constructed. You are not concerned about spoilers. The disadvantage is the same. Everybody knows what everybody is talking about. Everybody has read every single book - or almost. Everybody has an opinion on every book. Mostly, opinions are the same. Occasionally slightly different. In some rare cases, a new angle is taken. But everybody loves the author. Most people refer to her as "Diana" as if she were their best friend (in some cases it is true). Half of the conversations go along the lines of: "And which is your favourite? Which was your first?" It is inconceivable to confess that you actually don't like this or that book. You could be lynched.

I give my paper toward the end of the conference. I have chosen to talk about one of the most recent books, TheGame, that hasn't yet been discussed extensively. There is only one more paper on the same book. The other presenter and I have been in contact to make sure we don't overlap. We do. I speak after her and have to add every now and then: "As you have just heard..." Generally, I feel very much like walking out, because every aspect of my paper has in some way already been touched upon. On the other hand, the audience is engaged and asks clever questions. No awkward silence when the moderator says: "Any questions?"

Otherwise, Howl's Moving Castle is the most popular book at the conference. I wonder why. Can it be the movie? It is not my favourite book by Jones, and I don't find it particularly gratifying to discuss, as compared to many others. A lot is published on it already. And nobody even talks about the film adaptation as such. But apparently the movie effect is there.

Speaking of movies: in the evenings, we watch a BBC series of Archer's Goon. With Korean subtitles.

If I have learned something at this conference it is the fault of my usual neglect of writers' biographies. I have missed a very important dimension of my favourite author. Diana Wynne Jones spent her childhood in Thaxted.
Posted by Maria Nikolajeva at 18:13 2 comments:

On the other side of the table

A little more than a year ago I sat at a table facing a row of people on the other side. I was being interviewed for a job. Now the role is reversed. I am sitting on one side of the table with a colleague, and we are interviewing. I wonder if people who interviewed me felt as frustrated as I feel now. Candidates that look so promising on paper turn out worthless. The least appealing candidate is the best. As we listen, we both know that we will reject this particular candidate, who is certainly doing her best, but we need to go through the interview (unlike those talent quests on tv where the judges push a button and say "Out!"). We score them according to the many criteria we have set up ourselves. The equations don't quite work. We are not supposed to read recommendation letters before the interviews. I don't see why this would matter. I've written recommendation letters myself.

At least when I was interviewed I only had to wait overnight. Since we are interviewing more people next week, the pour souls will not know the results until then. What a ruthless world we live in.

In a week's time, a phone will ring, and the lucky one will hear: "You've got the job".
Posted by Maria Nikolajeva at 16:33 No comments: