I had a reason recently to look back at my early studies of children's literature, and it struck me that when I took my first undergrad course in Stockholm in 1982, some of the standard works you find today on any syllabus had not been published. No Jacqueline Rose, no Words about Pictures, no Don't Tell the Grownups. So what was on our syllabus? Our main book was a translation from Danish, From Snowhite to Snoopy, and was exactly what it sounds like: a thematic and historical overview. We read some chapters from a Swedish collection titled Children's Literature and Children's Literature Research, published in 1972, which covered a few central topics, such as tomboy literature. We also had my old professor's profound study Form in Children's Literature which was, I am convinced, one of the very first studies in the world to pay attention to the aesthetic features of children's literature, rather than topics and ideology. The Swedish Children's Books Institute had a fabulous international reference collection, and it subscribed to all major journals. In our doctoral seminar, we discussed Peter Hunt's early articles on childist criticism and Peter Hollindale's “Ideology and the Children’s Book” as they appreared. We read Rose and Jack Zipes, Humphrey Carpenter's The Secret Gardens, Aidan Chambers' Booktalk, Juliet Dussinberre's Alice to the Lighthouse. We read some excellent German and Norwegian research. Then we started producing our own colletions and textbooks: on young adult novel, on picturebooks; later, after I finished my PhD, I edited a volume on literary theory and children's literature which was used in every course in Sweden for a long time. As is often the case, we wrote books we wanted to read and needed for our teaching. Sadly, none of this early Swedish research is known and acknowledged in the English-speaking world, with the one exception. The concept of iconotext, used in most studies of picturebooks today, was coined by my fellow student Kristin Hallberg in a journal article in 1982.

Posted by Maria Nikolajeva at 11:36 3 comments:


A student has written a blog post about her academic post partum. Interestingly, while I was weeding the garden today as a break from my absolutely final editing, I had similar thoughts. It is clever to let a doctoral work take three years. If you are a serious scholar, during three years you develop so much that the final product looks completely different from your original design. This book has taken me four years to write. It has nothing to do whatsoever with my initial ideas.

Much like Clementine, I kept telling myself that this was just the first/second/third draft and that I will fix it when the time comes. When the time came, there was no time to fix it. When I started, it was full of possibilities and bifurcations. Now, at the closure, it's finite. It's all pluperfect. Memory of a memory.

I postponed the assemblage of loose notes, that gradually took form of chapters, as long as I could. Originally, I had seven chapters. I now have eight, none even remotedly resembling the original seven. The book is not really what I thought it would be. Whether it's better or worse or rather the other way round, I cannot judge at the moment.


Like Clementine, I'd like to attach a note to my reviewers, saying: This is not what I intended to write. This is not even what I promised to write in the proposal and what was approved by the first round of reviews. It is – yes, a changeling, a stranger that I don't want to touch or acknowledge. The beautiful baby I once had in mind is irretrievably gone.

Perhaps it's just as well. Perhaps the ugly duckling would have grown into a big ugly duck. Now I can imagine what a beautiful swan it might have been. If only... what? If somebody else had written it for me? No way.

I have put all the chapters and supplementary materials in one file and converted it to PDF.It is ready to go.

Posted by Maria Nikolajeva at 19:53 No comments: 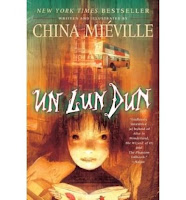 I like some of Mieville's books and dislike some. I like The City and the City and Embassytown. I have vague memories of disgust with King Rat (which I assume is the intention), and I put aside Kraken after a hundred pages because it was unbearably boring. I am fine with authors whose books are not always to my liking, and I am always prepared to give them another chance.

I started reading Un Lun Dun because a colleague from the English Department mentioned it over lunch table. Colleagues from the English Department seldom read children's books unless they have children, and this particular colleague was reading Un Lun Dun with his son with great enjoyment. I had to confess that I didn't know Mieville had written children's books, and I went home and bought it. I didn't have any expectations apart from someone I know well had recommended the book, and it was written by an author some of whose books I like. I felt obliged to read to the end to be able to engage in an informed discussion with my colleague; otherwise I would have stopped after fifty pages. The moment I saw the word “Chosen” I felt a strong desire to smash the book against the wall (I was reading on Kindle, so it wouldn't have been a good idea).

Now, of course the Chosen business is turned upside down (warning: spoilers!), and generally the whole book is one big parody. But parody only works as such for somebody who had read five hundred fantasy novels, and I am not sure Mieville has done so. He acknowledges Neil Gaiman and Norton Juster, among others, as his sources of inspiration, to which I can only say: sorry, Mr Mieville, you aren't up to your models (which is often the case). Where Gaiman and Juster are splendid fireworks, Un Lun Dun is a party cracker. There are far too many things recognisable from other fantasy texts, but not used creatively – rather randomly glued together, much like the buildings in Unlondon, made of moil objects (Moderately Obsolete in London). There are some wonderful details, such as the torus-shaped Unsun, or the animated milk carton who develops a devotion for the protagonist. This is typical of the novel: the least important secondary character is much more lovable than the protagonist. She is in fact as flat as a pancake. The text has no room for her to think, feel, be surprised. If she is scared, the text says she is scared. If she thinks, she thinks aloud. When she needs to act, she talks to other characters. All tokens of very old-fashioned children's literature. All directly opposite from the exquisite narration of Mieville's other books, including those I don't like. With all the upside-down, fractured, postmodernesque twists, the plot is painfully predictable. And there is no heart-breaking farewell in the end.

I am certainly a wrong reader for this book, fed up with parallel worlds and chosen children, virtuose wordplay and logical paradoxes. I can imagine that someone less spoiled, child or adult alike, would enjoy the book and appreciate exactly the features I find irritating. So don't let my negative response govern you choice. Read it and see for yourself.