Read the first, second and third chapters of this travelogue.

The drive from Swakopmund was only going to take two hours. I had no expectations of this afternoon, other than it would be the only camp without shower.

Side comment: It's nice to have a shower after a long day on the bus, or after a walk on a hot day. But I have no obsessive needs to shower every day. Thinking about how precious water is in all those places – is it really, really necessary to shower every day? I know most people will disagree.

We were going to Spitzkoppe, a weird rock formation in the desert that reminded me of Kata Tjuta in Australia ( a less known, but more spectacular neighbour to Uluru). I don't know whether this place was chosen simply because it was a reasonable overnight spot or whether it is considered a sight in its own right – Lonely Planet says “one of Namibia's most recognisable landmarks”.

I sat in the front that day (we moved clockwise every day, as you do on long bus tours), and after an hour of flat, featureless desert, something triangular appeared at the horizon. I suggested to Anton that this was where we going, but he said it was too near. I pointed out that “Spitz” means spearhead, and this hazy blue cone was as close you could get to a spearhead. It had to be it. Also, I said, it looks near, but it isn't. Indeed, the rock appeared on the left one moment, and on the right next, as the road winded; and it kept growing, as rocks do on an otherwise open horizon, and I started feeling that I would like the place. When we came closer it wasn't just one rock, but a huge group, and we drove right through it to our camp. It was magnificent. 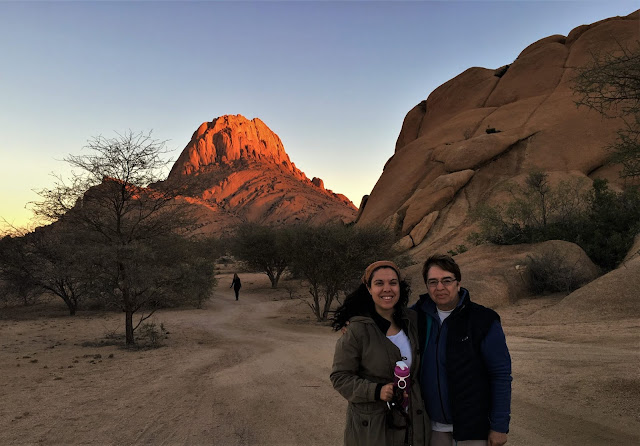 There was an option walk to see cave paintings and meet local people, which I skipped because I just wanted to walk on my own, as it was promised was possible. But it so happened that when the cave painting walk left, there was Anton and Kory and me, and our assistants had started pitching tents so it would have been rude not to help. The tent construction is very clever – of course I hadn't pitched a tent in fifty years so maybe all modern tents are like that. It was completely arbitrary where your tent would be pitched from one day to another, and they all look the same, so I made a point of marking my tent with a towel. You may laugh – but I am an old lady with silly habits. This picture gives you a very good idea of our camping arrangements. The beds were surprisingly comfortable. 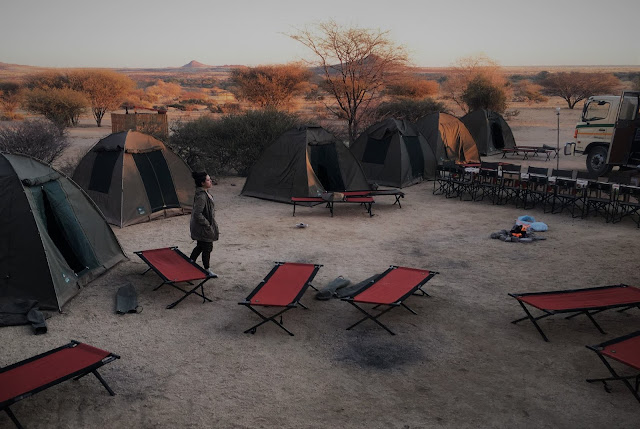 Anyway, setting up camp was quick. The scenery was stunning, and the sunset promised to be amazing. Dumi, our fantastic guide, pointed out a dip between two rocks, called The Bridge, and the sun seemed to be setting right there. It is easy to get lost in a desert, so I drew a mental line between the dip and the rock right above the camp – it had some specific features I could rely on, otherwise it can get deceptive since rocks change every minute as the sun is setting. I walked as far as I dared on my own, because I wanted to be sure I would find my way back before it started getting dark. The dip kept moving further and further away, as they do – I stated this earlier about dunes. Finally I climbed a very small rock and watched sunset from there. It felt I was alone on the whole world, in a huge valley surrounded by red rocks. Then I walked back, trying to walk in a straight line toward the rock I had chosen as my beacon. This place was a bonus; I hadn't registered it as a place of interest rather than a overnight stop. I was totally, profoundly happy.

There was fish for dinner, that our chef had bought that very morning at a market in Swakopmund. Fresh fish baked over open fire in a desert – what can be better?

After dinner Anton, Kory and I walked about fifty steps away from the camp and switched off our torches. There it was, the Milky Way, just as I remembered it. I had been worried the previous nights that I couldn't see it, because my vision is getting really poor, and I thought, what if I never ever would be able to see the Southern sky. But apparently it was just too much light before, even in camps, not to mention cities. There it was, the Cross and the Pointers and the Milky Way and the black nothing in the middle of it. It is a miracle every time. And Kory had never seen it before. Friends from the Southern hemisphere, you have no idea how lucky you are to have this incredible sky. It brought back the best memories of Australia, South Africa, Amazonas… I know it sounds pathetically trivial, but it means so much to me. Just as much as the seaside, or maybe more.

Back at the camp, one of the assistants was pointing out constellations using a phone app.

I woke up at five, packed quickly and then sat watching the light emerge and colours on the rocks go from grey to yellow to red, and by seven we hit the road. I would really have liked to stay in this place for one more day. Shower or no shower. 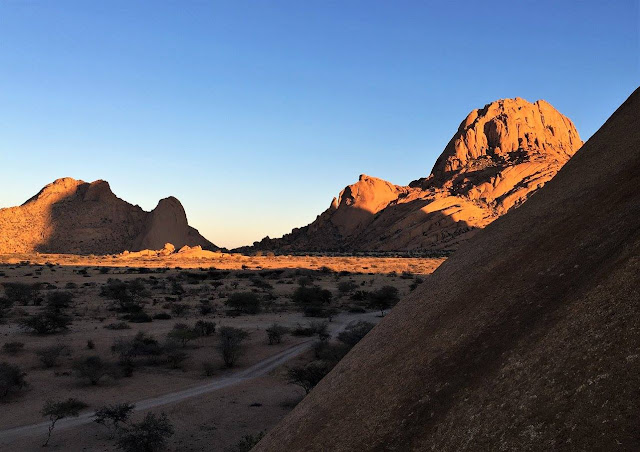 Posted by Maria Nikolajeva at 17:12