The day we left Spitzkoppe was probably the hardest and the most boring of the whole trip. I was in the front seat to the right, but there was really, really, really nothing to see. We were to cover 530 km, which is a long distance even on a German motorway, and we were on unpaved roads, and the estimate travel time was nine hours.

I am full of admiration for Dumi, our guide and driver. I just cannot imagine how he managed it. Driving a busload of fussy European tourists for nine hours on unpaved Namibian roads… But to be fair, we weren't fussy. We were patient and disciplined, and when we were given a ten-minute comfort stops – boys to the left, girls to the right – we were back in the bus in ten minutes; and when were we given thirty minutes in a supermarket to get our water and whatever else people wanted, we were back in thirty minutes. We all knew that the drive would take nine hours and were prepared. One of us got motion sick, and although I know it's a horrible thought, I was glad it wasn't me. I had been worried about motion sickness because I get it every now and then, on a scale that few people have witnessed, still less experienced. It's not just throwing up; if it hits me, I am knocked our for days (yes, I have been tested for all kinds of diseases, and nothing was found, so it's just my bad luck). I wear patches for flying, but they make me tired, sleepy, thirsty and disoriented, so I didn't want to wear them during the trip, taking terrible risks. My empathy with the poor motion-sick companion was total, while I was also glad it wasn't me, because a young motion-sick person evokes pity, a old motion-sick lady evokes disgust. Sorry, I couldn't help it. I sat through the day imagining myself motion-sick and wishing I had never come to Africa; so this day was particularly strenuous.

However, the last 100 km before we got to Etosha national park was a good paved road, and by the time we entered the park we were all excited, anticipating to see lots of animals, maybe even a rhino if we had luck. And what did we see less than a minute into the park, at the first waterhole? A rhino! 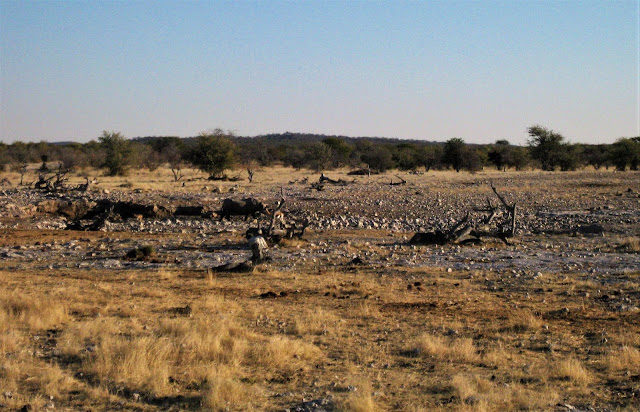 We only had time for a very short loop, but we saw giraffes, zebras, impala, kudu and jackals, so it was a good ending of a difficult day. And the best was still ahead.

We reached the camp site Okakeujo exactly at sunset, and Dumi kindly allowed us to run to the waterhole without setting up camp first. It is an artificial waterhole into which water is pumped. The horizon was still yellow-orange, and by the water there was a group of elephants, with another one approaching, and they greeted each other politely. There were two small ones. And a herd of giraffes. You could almost not see them in the twilight, but they were reflected in the water, moving slowly and graciously, and I could have watched them forever.

When Anton took this picture he said I would make it my cover photo on Facebook. Maybe he was joking, but I have.

Because I had just followed the group and had no idea how to get back to our camp lot, I had to go back when others went back. After dinner we went there again. The waterhole is floodlit, and it's magic. First, there was nothing, and then there was a rhino, moving slowly and freezing every now and then. It left, and another came and left, and another… and another. I believe they were several because they were of different size. 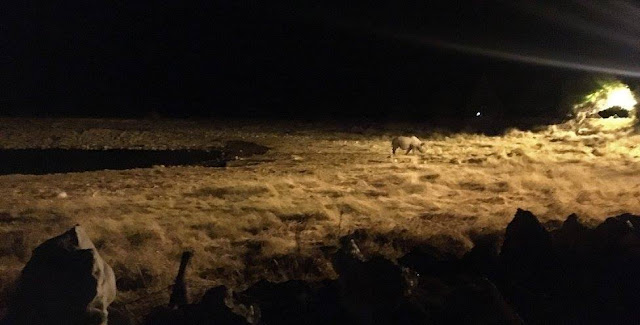 This picture shows a smaller one. Imagine one almost twice as big, two huge horns, closer and in perfect profile, white against the dark, its reflection in the water. No picture, but I will never forget it.

I asked Dumi whether we could run quickly to the waterhole before we left in the morning, and there were no animals there, as if there had never been any. Maybe we had dreamed them?

We drove in loops in the park, mentally adding animals to our catalogue:
tons of antelopes
zillions of zebras (and mind, it's zEbra, not zEEbra!) 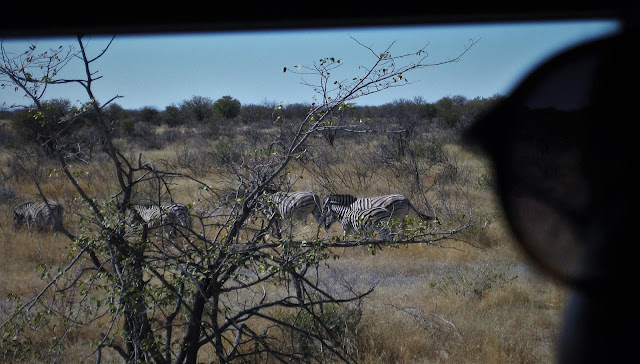 giraffes, one with a tiny baby 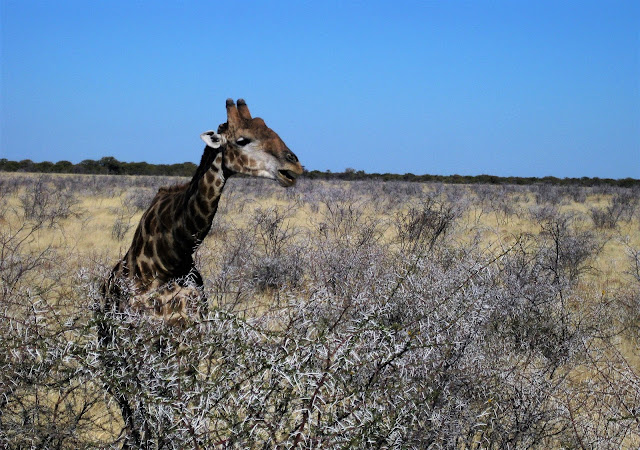 kudu
wildebeest, aka gnu (I think gnu is a better name)
red hartebeest
another rhino
jackals
secretary birds
kori bustard (with whom Kory naturally felt particular affinity)
ostriches
something that some people thought maybe possibly was a leopard, but the rest of us didn't believe them
and finally, at the very end of the day, three elephants very close by the roadside. 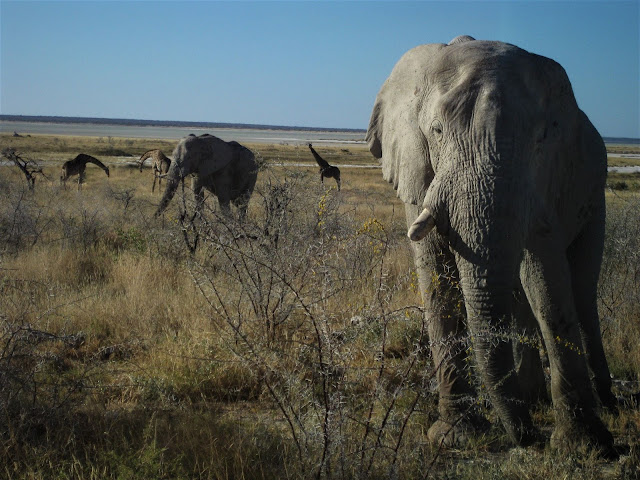 I was very happy that we got to see elephants so close, because I had seen them like that in South Africa and was eager for Kory and Anton to have this experience.

Dumi would stop whenever we saw anything interesting, and Tabiza gave us fascinating facts about animals. When he couldn't answer a question, he stealthily consulted a book.

We had lunch at Halali camp, midway through the park. While Tabiza prepared the meal, we were again allowed to go to the waterhole, which was a natural one, with a viewing platform high above it. There wasn't much activity in the middle of the day, but when I went there again after lunch, I saw a group of elephants leaving, so I guess if you stayed long enough you would see a lot. But we had to move on.

In the afternoon we drove out to Etosha pan that I thought was horrible and Anton thought was the highlight of the day. It is a neverending dry surface of salt, possibly as dead as a place can be. 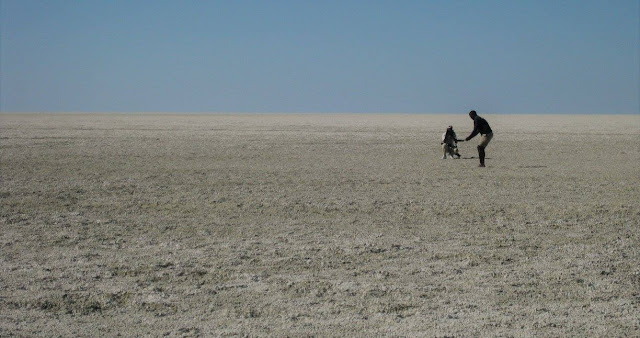 Everybody was fascinated, but I just wanted to get out of there as soon as possible. This picture is supposed to show me dying of thirst, but we didn't stage it very well. 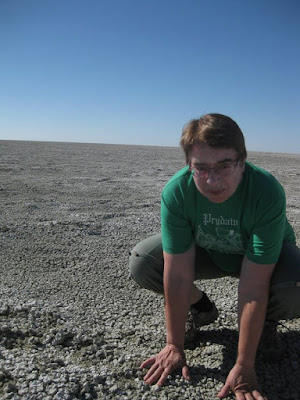 For the night, we stayed at yet another camp, Namutoni, on the eastern side of the park. Its waterhole was nothing like Okakeujo the day before, and strangely, I felt completely fed up with animals and also very tired. The next morning we drove a final short loop in the park and saw hyenas and a dik-dik, the smallest antelope in Africa, ridiculously small, like a toy. Then we had another long day on the road.

To be continued.
Posted by Maria Nikolajeva at 18:07