Read the first and second part of this travelogue.

We were instructed that breakfast would be served at 6, but by that time we were supposed to have packed our luggage and daypacks, bringing them to the truck; rolled up our sleeping bags and brought them to the truck – the opposite side – together with mattresses, and preferably folded the beds and put down the tents. Amazingly, it happened, day after day, like clockwork. I guess people coming on this kind of trip are well disciplined. And of course Dumi and his assistants were outstandingly efficient.

Since I went to bed early, I would wake up at five, and occasionally could enjoy a shower before everybody else, sometimes even a warm shower. All showers and other facilities in all camps were exemplary clean and nice.

From Sesriem we headed north toward Swakopmund on the Atlantic coast. Not quite north, though, because north of Sesriem is just sand dune after sand dune, and the road makes a long loop, almost halfway back to Windhoek. We were to cover 300 km that day, and based on the trip down from Windhoek I prepared for nice scenery to watch. It didn't turn out quite so.

First, we stopped for coffee at a place called appropriately Solitaire. It was a road crossing with a coffee shop in the centre. Now, a solitaire can refer to a diamond, but I think we all associated it with “solitary”. But the coffee was good, and they also sold “the famous Solitaire apple pie”. We all wondered whether apples came from.

The next stop was at the Tropic of Capricorn which was pathetically unremarkable, but of course we all took pictures. 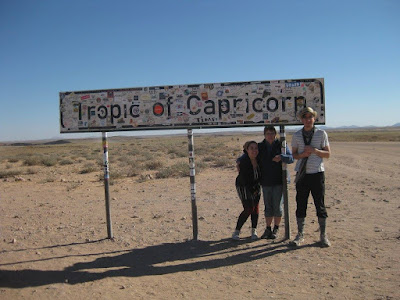 Then came the endless desert. I like deserts, but it was a particularly deserty desert, with absolutely nothing to look at until we came to Kuiseb Canyon, which was dramatic and a bit scary, with a narrow, steep and winding road with black rock on both sides. 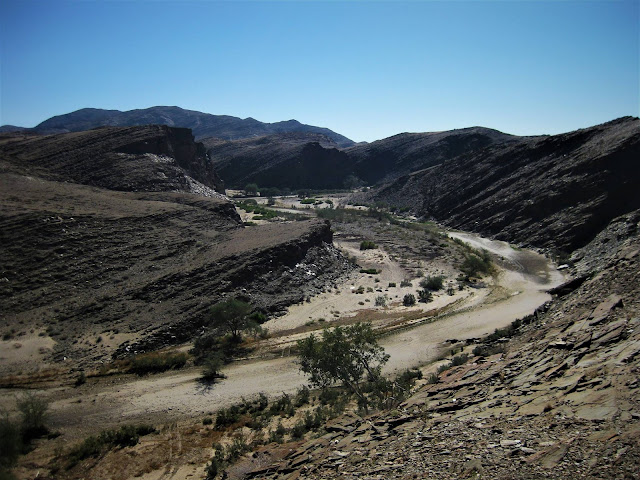 We stopped a couple of times to take pictures and also to look at three quiver trees that for some reason grew there, although they otherwise grow somewhere else. I said they looked like aloe, but Anton didn't believe me. However, I was right. 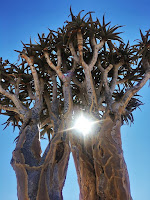 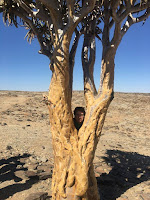 Then there was more desert, and still more desert, and it was getting absolutely flat and bare and featureless, just flat and dead all the way to the horizon. It made me tired because there was nothing to look at. My fellow travellers were asleep or listening to music or playing games. I was trying not to think about anything home- or work-related. It was a good exercise.

And then the desert stopped abruptly, and we were in a seaside resort, with palm trees and green shrubs and flowers, and neat houses with gardens – as if we were miraculously transported from Kansas to Oz. We were at Walvis Bay, a harbour town, where we were to have lunch and admire the flamingos. Yes, those famous flamingos from Attenborough films, millions of them. Well, it was wrong season for flamingos, so there were hundreds rather than millions, but it was a miracle being at a waterfront after hours in the desert. You have to believe me that there are flamingos in this picture because they were far away, and we were advised not to go close. 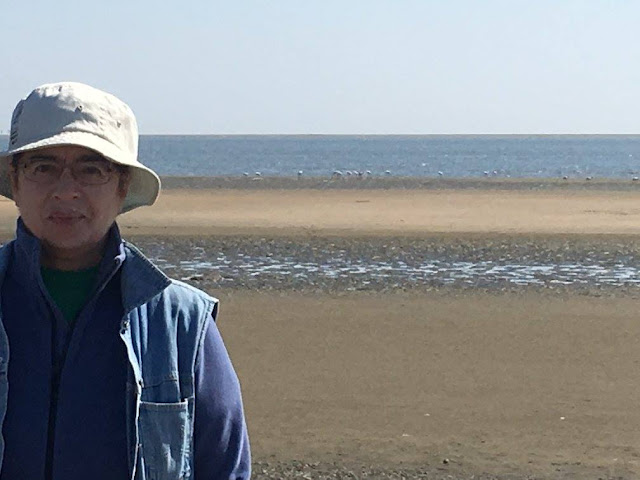 Then we hurried on to Swakopmund – again, first a strip of bare desert, and suddenly a green, neat, lovely town which could be a seaside resort anywhere in the world. This was a good reminder of what can be done in the desert as soon as there is fresh water, in this case the Swakop river, which unlike the seasonal Kuiseb – or ephemeral; I love this phrase: an ephemeral river – is permanent and allows a tiny bit of the desert to become a lovely town.

Some people had booked activities: there was a wide choice of sandboarding, hot air balloon, dolphin cruise, camel riding, and more. Anton was tempted by sky diving, but it was far too expensive. I considered camel riding, but Anton reminded me that I was likely to get motion sick, which was the main reason I opted out of dolphin cruise. After my experience with dunes, I also opted out of sandboarding, which I had seriously considered back home. There was also a township walk, but it's not my cup of tea. Eventually, we decided to have a quiet afternoon, walk around in town, and for the evening Anton had booked a table in a fancy restaurant. This was the one and only time during our trip we stayed in a guest house, and it was nice to sleep in a bed for a change. It was also good not to have any activities and digest everything we had already seen and done, which was overwhelming.

We strolled in the town, that had a wealthy, European atmosphere, and many streets still had German names. We went to the beach. I hadn't been at an ocean beach for years, not since Rio de Janeiro, which was six years ago, so I now can add Swakopmund to my mantra of seaside places. Huge waves, and we went on the pier and watched the sunset. It couldn't be better. 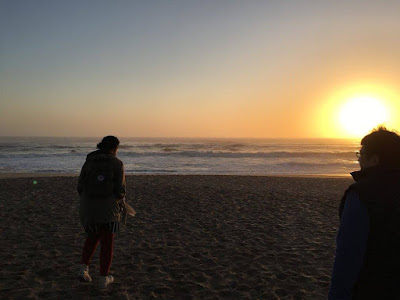 The restaurant was excellent. Back home, when I was reading the guidebook, I checked a famous restaurant in Windhoek, only to discover that it had recently closed down. Which was just as well, because tired as we were after the long flight we would probably not have enjoyed it. But we enjoyed The Tug immensely. Seriously, the best oysters I have ever had. Local fish with calamari and prawns. It was clever of Anton to book the day before because it was full.

I liked Swakopmund so much that I thought I might retire there if I couldn't stay in the UK. We looked at property prices displayed in windows: I would easily afford a nice house. But then of course it's far away; I don't think the grandkids would visit over the weekend as they do in Cambridge. Anyway, it was just a thought.

We had a leisurely start the next day, and again while some other people engaged in activities, we three walked around, bought a headtorch and a towel for me, and attempted to get some cash. The currency situation in Namibia is complicated: the Namibian dollar is tied to South African rand, and both are in circulation, but Dumi had advised us to have a supply of rand because they could also be used in Botswana and Zimbabwe, and there was no guarantee there would be more cash machines anywhere on our route. We didn't need a lot of cash, mostly for water and occasional snacks; but we were running out of what we had taken out in the airport. We went into a bank where there was a long queue, only to learn that we couldn't get rand on our credit cards, but we could take Namibian dollars from a cash machine and then exchange for rand. I don't want to think how much all these operations cost in commissions. It had to be done, and it was done. Until the end of the trip, I hadn't figured out the exchange rates and prices, so eventually I just gave Anton all my cash to dispose of as he saw fit.
After managing our financial matters, we went to café Anton, both for the name and because it was highly recommended in Lonely Planet for its exceptional German bakery. Our final activity in Swakopmund, which I liked more and more and would like to stay longer in, was the aquarium. Frankly, it wasn't much of an aquarium if you have been to some of the good ones, but it had two sharks and some local fish, and it really didn't matter because we were in a lovely town by the sea; but now it was time to move on.

To be continued.
Posted by Maria Nikolajeva at 17:22