Report from the celebration marathon day 1

You can plan as much as you want, but fate will always decide otherwise. To begin with, I got a most nasty flu the week before. So nasty that I had to cancel all meetings and supervisions and spent most of the week in bed. The cancellations included the born-on-May-16 drink, and I already had a vision of the Homerton reception going on without me (so that they could say what they really think of me), and non-refundable air ticket, and all the mysteries and surprises wasted. I did go to work on Friday, but felt profoundly rotten. At lunch, Morag asked me whether I liked surprises. By that time, I didn't care. Just as I was about to leave, one of the born-on-May-16 ladies came into my office with a lovely tea-tree, hurrying to say: “I know you said no presents, it's not for you, it's for your garden”. It was very sweet of her, but the idea of having to plant a tree almost made me sick. I went home and spent two more days in bed, contemplating the Universal Injustice.

On Monday morning I dragged myself out of bed and went to a long, albeit productive meeting. Then I went back home and drank gallons of tea with honey. It was cold and rainy, and putting on the new outfit purchased for the occasion was out of the question. I was unreasonably anxious. When I was in therapy many years ago, my counsellor explained to me that my attitude to life was called “victim behaviour” meaning that whatever happened I thought it was my fault. She helped me deal with it, but sometimes it breaks through. I kept thinking it was the wrong day, and I had ordered too little or too much food, and the invitations had been sent long ago so people would have forgotten and nobody would turn up; and although I was unquestionably a Fellow people would think or even say: Who is she anyway; and I would stumble and fall because of my high heels; and what if I just take my car and drive as far away as a full tank would take me.

Then of course it was all around me, the food and bottles arrived (just a bit late, and I had to remind them that I had ordered sparkling rather than regular wine), and the students gave me an olive tree, repeating the reason: “It's not for you, it's for you garden”. And when I started on my well-rehearsed speech, I suddenly forgot all I wanted to say and certainly sounded daft, but hopefully, being the object of celebration, was forgiven. 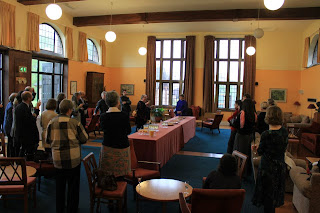 Then came the surprise. Morag had warned me, and I was pretty sure the students would bring a cake, since they are famous for their cakes, but I wasn't prepared for what was to come. I had thought maybe a gift card for a garden centre or a dollhouse shop. Or a visit to some famous garden or a garden show or a dollhouse fair. Somehow my thinking didn't go beyond gardens and dollhouses, since I knew that all my friends knew about my major passions. But Morag knew me better than I knew myself, and she had taken a completely different direction. So what did they get me? A day with a personal shopper! It took me a couple of moments to take it in: Are they saying that my taste in clothes is so poor that I need guidance? But no, of course not, they know I love nice clothes, but hate shopping, so this was exactly what I didn't know I wanted, and it wasn't a present, but an experience, and it was the very best thing they could think of. They gave me a card which everyone, really everyone had signed, and Morag said afterwards that she hadn't anticipated such wide and generous response. She had started with just a few people, but apparently more people had heard and wanted to contribute, which felt so good I didn't even know what to say. To add to my confusion, the students brought out a cake so pretty I didn't dare to cut it, but I had to blow the candles, which I am sure I hadn't done for the past forty years.

I think everyone enjoyed it. Two things nearly killed me though. Every five minutes I had to run to Staffan, who was sitting quietly in the corner, and borrow a tissue to blow my nose. I hope people thought I was moved to tears, but in fact my cold was getting worse. And by the end of the second hour my heels felt like torture tools, so when we finally left, I took them off and walked in my stockings, but I don't think anyone noticed or cared, because I was already carrying an olive tree, some wine bottles and boxes of chocolate (“No presents!”), a huge bouquet (“No flowers!”) and a pile of cards.

Needless to say, I went straight to bed.

To be continued.
Photos by Faye Yung.

Posted by Maria Nikolajeva at 17:11