For the rest of the world, the second World War started in 1939. In the Soviet Union, it started on June 22, 1941 and was called the Great Patriotic War. Within a couple of weeks, all Germans in every city, town and villages in Russia were told that they would be deported. They were told it was for their own protection and that they would be able to come back once the war was over. Jonathan and Maria lived in a German village in the Caucasus, together with a huge group of relatives, nephews and their families. They were herded together and taken by a freight boat across the Caspian Sea, and from there they were to go by railway. They knew that they were going into death. But they did not despair. The family chronicle says that they sat on deck in rain and storm, like cattle, and suddenly one of the nephews said: "Uncle Jonathan, can you please sing something?" And Jonathan stood up and sand Mephistopheles' aria, which was his special hit.

Then they were put in the infamous cattle car to be transported further eastward. But Jonathan got very sick and had to be carried into the car. Three days later he died and was buried in a mass grave at a little railway station, together with others who had died on the way. Many, many years later we put a memorial plaque on our family grave in the German Cemetery in Moscow.

The family was forced to go on. They were dumped off in a tiny village in Northern Kazakhstan and put up to live in local people's homes. Soon first all men and then all able women and young girls were taken away to forced labour. It was called, in true Orwellian spirit, called "Labour Army".
Maria was the only one left of the family, but there were some other old Germans with her. Some of those were artisans and made it somehow. Maria was sixty, but healthy and strong. She went to the boss of the collective farm and asked for work. Her first job was to pile dried cow dung. They heated houses with cow dung because there was no wood in the steppe. In that way she made some wages and got a little flour. The boss liked Maria and invited her to work in a nursery school. It was good, the kids liked her, the mothers liked her because she never stole bread from the kids and shared equally between them all. Most nurses stole food from the kids since the nursery was relatively well-supplied.

Some years later Maria's youngest daughter, who had also been deported and survived the horrors of “Labour Army”, found her way to her mother. All in all, they stayed fifteen years in Kazakhstan. At the end of the war all Germans expected to be allowed to go home, as they had been promised. But there came an official to the village and read a paper for the Germans. It said that all persons of German nationality who had been deported in 1941 according to the special decree of the Supreme Soviet were to live at their places of deportation "for ever" - this was the first time they heard the words: "For ever". Every attempt at escape was to be punished by twenty five years of labour camp. This was also a new word. Anyone who helped Germans to escape was to be punished by five years of prison.

Then in 1953 Stalin died. Three years later all Germans were summoned to the police and received their ID-cards. Clean cards too, no stamps, no indication of deportation. The deported Germans had shown in practice that they were good Soviet citizens, was the verdict. And they had indeed. They worked as hard an anyone just to show that they were Soviet citizens. No matter good or bad, Soviet was it. There were even Germans who wanted to join the Communist party to show how they liked the authorities. The same authorities who had driven them away from their home and let them die in the steppe.

Anyway, the Germans were allowed to live where they wished, but not where they had lived before the deportation. In that way the authorities tried to avoid that the Germans would claim back their houses, schools and churches. They had no property rights. Still some of them moved back to Caucasus. They were not allowed to live where they had lived before, bit they still wanted to live near the places their forefathers had lived. They came one after another, bought houses in old German villages, got jobs. During the '60s, we would often go and visit granny's cousins in Pyatigorsk.

But the majority stayed in Kazakhstan. They had nowhere to go. Some moved to towns, others stayed in the country and went on as peasants. They were diligent and hard-working, they had saved money, built solid stone houses, worked their land, become well-off. They did not want to leave all that once again. Instead, they started schools, libraries, theatres and choirs. This is what our recent visitors fromKazakhstan referred to.

Since my Grossmama Maria was deported from Caucasus she was allowed to come and live with her daughter, my granny, in Moscow. I remember her well. In 1958 we celebrated her eightieth birthday with a huge family gathering. She spoke, read and sang to me in German. Sometimes I was horrendously nasty and rude to her, and I am still ashamed to think about it. She was the nicest, kindest person in the world.

She was the last of her generation, and everybody came to us, to her, on the forbidden Christmas Eve, but I have already told this story.

She died on May 11, 1962, when I was ten and didn't understand death. Perhaps because of that I cannot say that I miss her, in the same way I miss my granny. But I have warm memories of her. 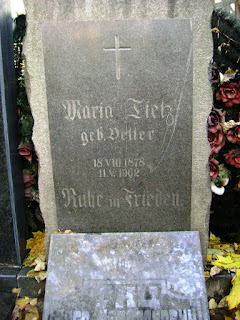 Posted by Maria Nikolajeva at 18:16