The other day I was invited to a concert at Berwald Concert Hall. I don’t know why I had ignored it in favour of Stockholm Concert Hall in the past three years; I guess it just so happened. Yet being there brought back an avalanche of memories.

Once upon a time, five lives ago, I used to work as an interpreter at Swedish Army Tattoo. It was a huge biennial event, with urban parades, performances at big arenas and concerts that were usually held in Berwald Hall. Many international bands attended, and the foremost guests of honour were the US and the Soviet/Russian bands. From the USA, it was most often US Army Band “Pershing’s Own”, and from Russia one of the two top bands, Army or Navy. All were musicians of highest class. As an interpreter for the Russian band, I had all kinds of tasks, from small talk at table (when they take away your plate before you had a chance to eat) to guiding the Russian bus driver through Stockholm to rendering instructions for marching performances. One year, and I am not sure exactly which year, possibly 1990 when the fall of Soviet communism was imminent, I was sitting on the stage in Berwald Hall, with US Army Band “Pershing’s Own” on my right and the Exemplary Band of Soviet Navy on the left: for the first time in history they were to perform together. For me, it was a sublime moment, and I could not help saying so as we finished the rehearsal. Friends, I said, I grew up in the Soviet Union, and I could never imagine I would live to see a Russian and an American band performing together, in a deeply significant symbolic act of friendship and solidarity. I broke into tears, and the musicians gave me an applaud. The concert was a tremendous success. At that time, we were sure that things were going in the right direction, and that the only way the two armies should ever meet was in a concert hall.

The story had an amusing ending. Colonel Shelburn, the boss of Pershing’s Own, asked for my business card, and a few weeks later there was a letter in my pigeonhole at work, in a fancy envelope emblazoned with “US Department of Defence Pentagon”. I wonder what my colleagues thought. 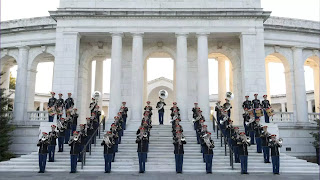 You do have a life full of experiences that not so many people share!