Reflections on learning a language

If you have followed my blog you know that one of my post-retirement projects was to learn a new language. Believe me or not, I have been so busy in my first eighteen months of retirement that I never got round to language learning and hadn’t even decided which language to learn. I wanted a language that was different from all languages I know so it would be a real challenge, but still manageable. I didn’t want to learn a language to be able to travel and speak it – I just wanted brain gymnastics. The languages I considered were Hebrew, Japanese and Welsh, each with a challenge of its own and each with a special significance and attraction.

I won’t claim that embarking on language studies was a new year resolution, but it felt a good starting point. After further deliberations I chose Welsh, which was perhaps too convenient a choice since at least it uses Latin alphabet (although with several weird digraphs to convey weird sounds). I had previously looked at various learning platforms, assessing their suitability for my purposes. I don’t want live online sessions in a group, and I want to practice when and where I please. I want to keep my own pace. I don’t want to compete with fellow learners, and I don’t want tests and assessments. Somehow, Duolingo popped up in my searches, and I decided to give it a go. After four weeks I am still happy with it. I have read reviews describing Duolingo as a gaming platform, and it is true that you get jewels, crowns and other rewards, and that after each completed lesson a green owl gives you praise for your progress. I ignore these aspects, and they don’t bother me. I have even got used to comments such as “Awesome!” and “Amazing!” after every correct answer.

On the other hand, I have read complaints that the neverending practice of “I don’t want to buy the seven goats and the five ducks” wasn’t useful for an everyday conversation, which is only partially true, because through such practice you will eventually be able to say whatever you want or don’t want to buy, in whatever quantities, at your travel destination. I guess it all depends on your expectations. I don’t intend to become a fluent speaker; as I said, all I want it keep my brain in trim. For this objective, counting goats and ducks is perfect.

What does bother me about my fellow learners, on the rare occasions I visit the discussion forum, is their casual attitude. You can see from forum participants’ profiles what languages they are learning and how far they have proceeded, and I am puzzled to see that lots of people are learning fifteen languages. I know there are linguistic geniuses, but is it indeed just a game: they sign up for a language, do ten lessons and claim that they have mastered another language? Well, it’s their problem.

My problem is not to be tempted by Duolingo’s rewards and stay on the same lesson and practice, practice, practice, until I feel confident and the exercise begins to feel repetitive. Of course as my vocabulary grows and grammar becomes more complicated, I need more and more practice. The algorithm works fine, making me go back and repeat and revise. It keeps track of my previous mistakes and makes me practice correct answers. I am loving it.

So what have I learned in four weeks?

I think the course design is great. It has been a long time since I learned a language from scratch, but I don’t think I had to memorise so many words in each lesson. Yet memorising words isn’t enough, you need to practice using them in grammatically and syntactically correct phrases, and Welsh grammar and syntax is mind-boggling. And the words are mostly unrecognisable, except for obvious borrowings. Eliffant or dolffin or even teigr are easy, but what about buwch, blaidd, cwningen, hwyaden and llygoden? None of the languages I know are of any help. Similarly, while you probably are safe with Ionawr, Ebrill and even Awst, you get lost with Gorffennaf or Rhagfyr.

Pronunciation is deceptive because many letters are pronounced in unpredictable ways, and yes, those digraphs! Although I have realised that the sound learners find the most difficult is similar to my native Russian’s щ, which English and Swedish speakers find completely impossible. And I have no problems rolling my rs.

And yet I probably could make a simple conversation now, introducing myself by saying that I am not a farmer or an electrician, but a female (!) teacher; that I don’t wear winter clothes in summer; that I don’t like ironing, but enjoy walking; that I want carrot/potato/leek/pea soup for lunch, but I don’t eat meat, and I don’t eat sausage either (those small words!); that I like cats and I like dogs too; that I like learning Welsh; that I am tired, good night.

Duolingo uses a computer-generated voice which is wise, but I also listen to other recorded voices to get used to the sounds. I have found a site with children’s audio-books to which I listen, and every now and then I recognise a word. I have learned to sing Old Macdonald had a farm in Welsh. Very good when you are practising animals. I have bought a book titled Teach Your Cat Welsh. How could I resist it? It offers a slightly different vocabulary from Duolingo. I don’t think I would have reached “Don’t scratch” in the near future. I have tried to read a real picturebook, but it felt a bit too advanced so far. But I understand sentence structure and basic grammar even when I don’t know the words. Sometimes it is hard to find a word in a dictionary because consonants mutate in certain positions: un ci, dau gi, tri chi.

Again, I have no memory of when a language I was learning started making sense. One strategy that my Swedish teacher insisted on is starting writing from start. Even if it is just a very short text, like: “Good morning, I am making breakfast, I want bread and cheese and honey, orange juice, coffee and milk. I enjoy walking, and I am wearing a coat, a hat, a scarf and gloves”. I write such silly journal entries every day, trying to use as many words and phrases as possible. I write with ink in a pretty notebook, creating links between brain, eye and hand. Likewise, I talk to myself in Welsh, name objects around me, make small reflections. “I like chocolate, I am eating chocolate”.

I have learned 230 words most of which I actually remember and can use. I spend about an hour a day practising, including weekends, although I only signed up for 15 minutes. I have no idea how far it will take me. When I one day get to the end of Duolingo’s course I will consider what I want next. Maybe I can sign up for an advanced course. Or maybe I can switch to learning Hebrew. 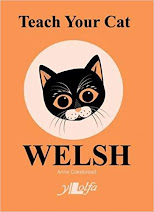 Posted by Maria Nikolajeva at 14:23