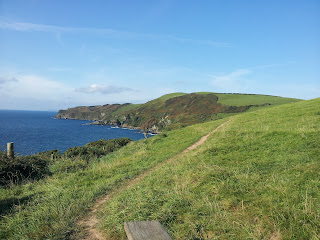 On our last day I decided to take a longer walk along the coast, since I now felt confident that I could do it if I just took it easy. I asked Staffan to drop me off in a village some miles away where a trail started. It took me right down from a high cliff to a cove where I could easily imagine that I was the last human being on earth, if I hadn't seen fresh human and dog tracks in the wet sand after the tide. I sat there for some time looking at the surf. I can watch the waves for hours and never get tired of it because it's the most peaceful thing in the world. Yet I didn't allow myself to linger since I had no idea what was waiting for me. It was a very steep path up to the cliffs, but the view was worth it. I started meeting people, in pairs and groups, some with dogs. I made me feel safe. All guidebooks tell you never to walk alone, but do I have a choice? The path climbed up and down and out on rocks, and it was splendid. At one point I had to negotiate a herd of cows, and I also saw wild deer, too far away to get a good picture. I had a picnic with a magnificent view from one of the many strategically placed benches.

Then I had a choice of going inland and straight back to Pont or continuing toward Polruan, which I did, toying with the idea of maybe catching a bus or even taking a taxi, but it proved too good to be true. I had a most abominable cup of coffee at a deceptively nice-looking coffee shop in Polruan, sat for a while watching the harbour and the ferry that I had taken the day before yesterday. Then I braced myself for another mile of walk, hoping that the wild beasts would be elsewhere, which they luckily were. Without delays, it took me just thirty-five minutes. I am extremely proud of myself. I know some of my friends will ask: did you go to the famous castles? Art galleries? Gardens? My answer will be: No, I was on a holiday.

Posted by Maria Nikolajeva at 21:41