I have never been a real collector. I collected poststamps when I was a child. I collected something as trivial as animals and plants, but I didn't like it when adults gave me pretty sets of stamps from a bookstore. The whole point of collecting was to seek, find, get hold of. Not own. (Tove Jansson has a wonderful passage on this). What I really regret is that I didn't listen to my mother who, when I was seven or so, suggested that I should collect musicians' autographs. Given the musical circles I grew up in, it would have been a formidable collection. Probably worth a fortune by now.

I collect Alice in Wonderland in different translations and with different illustrations (donations welcome). But I don't collect sytematically, and I would never pay fancy prices for a rare edition.

Maybe I am just not a natural collector.

For a while, I collected coffee grinders. I had perhaps two dozen. But there aren't that many varieties of coffee grinders, so I was soon satisfied - but also dissatisfied by owning, not collecting. Besides, you cannot do much with coffee grinders except put them on a shelf to gather dust. So when I gave away all coffee grinders I decided to collect something one could actually use.

I collect a very special Swedish china from the famous Rörstrand china factory. The set called Gröna Anna, Green Anna, was first produced in 1898, and some of the old pieces are still in circulation. You can tell by the stamps. The set was also produced between 1966 and 2002, but in a slightly different design.

I started by buying a set of plates in a thrift shop, but all the rest I get from eBay. For quite a long time I studied the market, to see what was available and what the reasonable prices were. Sometimes you get incredible bargains in eBay. And it's amazing how much you learn just by discovering the names and uses of various china pieces. Do you know what a cabaret is? Don't look it up on the web, it's not there. But a good old dictionary will tell you. 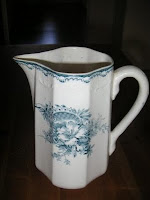 By now I have a full set of everyday pieces: plates, soup plates, side plates, tea cups, coffee cups, mugs, egg cups, a milk jug, a cream jug, a sugar bowl, dishes, bowls. But I also have quite a few of the older things, and here the collector's instinct comes in. For some reason, certain pieces are very rare. Like the said cabaret - I've only seen it once in two years, and there is a limit to how much I am prepared to pay. But how exciting! Another piece that I've only seen twice is an extremely sweet hexagonal jug. Now, after two years, I finally got one. I paid slightly more than I had intended, because I knew they were so rare. The problem is, Swedish eBay normally doesn't ship overseas, so I use Julia's address, much to her irritation. This time the seller called to say she'd discovered some cracks in the jug and would ship it free if I still wanted it. Then she called again to say that she'd discovered more defects and would give it away if I just paid the postage. So now I have this very old, very rare, very cracked and pretty jug for almost nothing. That's the true collectors delight. My next coveted object is a saladier.
Posted by Maria Nikolajeva at 17:41

Email ThisBlogThis!Share to TwitterShare to FacebookShare to Pinterest
Labels: hobbies

It's sitting in my hallway, in case you were wondering. Still in the box, of course.