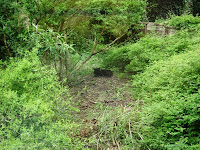 I worked in the back garden today, pruning the shrubs and generally trying to make it look like a garden rather than a jungle. When I wanted to show Staffan the view from what is now slowly becoming my study, I saw an intruder lying just at the spot that I had cleared. Staffan fetched Miso who produced some miserable tones and went away, pretending that she wasn't at all interested. The black cat stayed where he was, even when I went out through one of our many secret back doors. Obviously this is his territory.
Posted by Maria Nikolajeva at 20:12

Email ThisBlogThis!Share to TwitterShare to FacebookShare to Pinterest
Labels: cats

This could be the 'gardening cat'. Whenever we do any gardening a black cat turns up to inspect. We never see it otherwise, only when gardening.

I see, it's a local celebrity!