A horror story with a happy ending

It is "the day before the day before the day", as the Swedish saying goes, and it is the day to get a Christmas tree. Some people might say: what's the point of having a tree when you have no small children. But we have always had a tree, except maybe some years when we went to warmer latitudes for the holidays. So after we had loaded for Christmas dinner we crossed the road to the garden store, where Staffan some days ago had investigated local supplies of Christmas trees. But, what a chock! - not one single tree. "No sir, sorry sir, we're out of trees, no we are not expecting any more". Unbelieable. We checked the B&Q nearby. Not a tree. "Sorry sir..." I have never been so disappointed since my parents did not give me a dog when I was small. We had a couple of days ago seen a flower shop with a gimmick outside used for wrapping Christmas trees, and I also remembered the farm where we occasionally go for meat. However, I envisioned all the food we had just bought and that I had to cook, so I entrusted Staffan with the task of tackling the tree issue. I did suggest that he might ring before going there.

Off he went, leaving me with ham and red cabbage and beans. It takes a lot of time to cook a proper Swedish Christmas dinner, and somehow it takes just as long time to cook for three as for twenty. I forgot the time, but when it had gone two hours I wondered whether I should start worrying. I know Staffan well, and I know that he is stubborn, but in two hours you can almost go as far as Manchester. I didn't really feel a Christmas tree was worth the trip.

He called some time after, could not explain where he was, but asked me to check an address on his computer screen. Two hours later he came in triumphantly, and I must admit that it is one of the prettiest trees we've ever had. 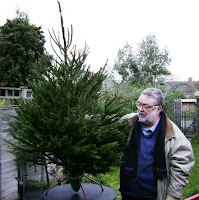 Posted by Maria Nikolajeva at 15:34