After a couple of my comments on Facebook, I got a request to share my experience of coping with shortages during hard times, and since hard times were constant during my childhood and youth, I have no problems coming with examples.


My parents and grandparents had of course lived through war, famine and rations, but by the time I was born our family was relatively affluent and even privileged. As a child I never wondered where food came from and how much it cost, and it was in my upper teens I realised how much things had deteriorated, or as the saying went: Communism has won a total victory over [cheese, sausage, caviar, salmon, bananas – substitute as required].

- I remember this shelf used to have fifteen kinds of cheese. That shelf had twenty kinds of sausage. The shelf over there had ten kinds of tea…
One salesperson to another:
- Hell of a good memory this granny has!


I remember those fifteen kinds of cheese on occasions when someone took me shopping, which didn't happen often. I remember hams and sausage and pate. I remember the smell of newly ground coffee. My grandfather, a great coffee lover, would blend one third of Arabica, one third of Colombia, and one Costa Rica. I remember that tea connoisseurs prefer Ceylon over Indian, and totally despised Grusian.

Variant of the above:
- I remember this shelf used to have salmon, sturgeon, red and black caviar, shrimp, oysters… What was the harm of it all?

Vignette:
- Is there really no cheese in your shop?
- No, it's the shop next door that has no cheese, we have no sausage.


Another:
- Can you slice 200 gram sausage for me?
- Of course we can, just bring your sausage.


These are jokes, but they were a close reflection of reality. So how did we cope with shortages, when there was shortage of everything? One day I will tell you how we coped with shortages of clothes, shoes, tights, shampoo, cosmetics, baby pacifiers, book shelves (not to mention books), rugs, female hygiene, pencils, notebooks, towels, bed linen, detergent, paper napkins, sewing thread, electric bulbs, Christmas candles, and many more items people in the first world take for granted. I may tell you how we coped without washing machines, or dishwashers, or freezers, or record players. But this will be another story that will be told another time. This story is a response to the current situation and will therefore focus on the current issues, such as toilet paper and food staples.


When my daughter Julia was three or four, we went to visit family in Moscow, and at the airport she needed a pee. I took her to ladies room, and after she was done she asked me helplessly: “Mummy, where is toilet paper?” She could not in her wildest dreams imagine that what she saw was toilet paper, more like sandpaper. For me, it was by far not the worst. I was used to wipe my bum with newspapers, as everybody else. As a child, when we ran around in nature, we would use leaves and grass.


During the worst shortages of toilet paper in the late 1970s and '80s, people would steal toilet paper from work – if it was available there. In nicer public toilets, for instance, in theatres and museums, there would be an attendant providing strictly one square of paper per person.


In mid-'80s, a Swedish writer was staying with a colleague in Moscow, a highly intellectual, refined lady. The Swedish guest was an idealist and had decided that during her visit she would live like ordinary Russians. The first culture shock came one early morning, when the hostess woke her saying: "Get up quickly. I have been told that in a suburb shop fifteen metro stops and ten bus stops from here there will possibly be toilet paper later today. They will allow twenty rolls per person. The shop opens in two hours, we must go as soon as possible and queue". The Swedish writer never believed in victorious socialism after that.


At that time you could see famous writers and artists walk Moscow streets carrying packages of toilet paper. A roll would be the best birthday present. This wasn't an emergency or a crisis, it was our everyday life.


When it comes to staples, I remember well when at the age of ten we were all promptly dispatched to queue for flour, equipped with pillowcases, since there were no bags available: flour would be poured from huge sacks into whatever you brought. It was rationed to maybe two or maybe five kilos per person, and after we children had queued for two or three hours, the rest of the family would join, each with a pillowcase.

Yes, that was the country of victorious socialism.

A sign in a shop window during completed communism: "There is no need for milk today".


The most important item every person always carried on them was a net bag, the infamous just-in-case bag, a Soviet citizen's best friend. It was fifty-odd years before environmental concerns so we didn't use our environmentally-friendly bags for ideological reasons, but exclusively because there were no shopping bags available in shops, and you needed to have your just-in-case bag just in case you saw something worth buying. Maybe potato, maybe apples, maybe cottage cheese, tea, salt, oats, pickles, mustard. And when you did see something, you were a good friend and bought as much as you could carry, to share with others. It wasn't shopping, it was hunting. For some things, such as cream, you had to bring your own jar.


The problem with just-in-case was that everyone could see what you were carrying. A friend once heard two guys behind her:
- Look what a smart babe! Look at her fir-coat! She must be a foreigner.
- No way! She is carrying five frozen chickens in her net bag.


I remember one day a friend and I were going along a central street in Moscow, on our way to visit some other friends. We saw a line and joined it without even asking first what was on sale. It turned out to be bananas, something we hadn't seen for many years. The line was long and moved slowly. People were buying as much as their just-in-cases could carry, and more. We were initially going to buy a kilo, but as we progressed forward in line, our appetites grew. We would buy a kilo each. No, we would buy more and give to our friends. No, we would buy more still and share with folk at work. By that time, the line got anxious that the kiosk would run out of bananas and demanded that they were restricted to five kilos per person.


On another occasion, a co-worker went hunting – during working hours of course, as was the accepted practice – and came back with ten boxes of a very special nostalgic candy from our childhood. We all happily paid for a box each, then looked at each other and said: “Let's eat it now. Our children don't even know what it is, so they won't miss it”.


This is, very briefly, how we coped with shortages. Firstly, you learned to manage with what was available. In winter, apples was the only fruit you could get if you were lucky. Once again, my little daughter caused indignant sensation during a visit in Moscow when she was offered an apple and asked for a pear instead, the spoilt Western brat! Secondly, you were nice to each other and shared. People who had allotments would share whatever they managed to grow. We made preserves, dried apples when they were abundant. We picked and dried mushrooms. I give you dried mushrooms, you give me a jar of jam. I give you a bar of chocolate, you give me a bar of soap. Thirdly, when you have no reference frames, you don't know what you are missing. Yes, we did remember the hams and cheeses of our childhood, but our children didn't, so they were happy with whatever we could put on the table. Buckwheat porridge, cabbage soup, potato cakes, bread and butter and cheese of the only kind available, “cheese”.


With this background, I am watching the current stockpiling with some amusement. That said, I have stockpiled toilet paper, chicken peas, beans, lentils, rice, buckwheat, coffee and cat food. I think I will survive. 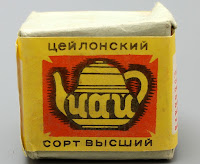 Posted by Maria Nikolajeva at 16:47

Wonderful story, thanks for sharing