After long deliberations we have changed the speedometer in the car. The kays are still there, but a smaller size - just enough to evoke nostalgic feelings. The man at the workshop wondered whether we we staying in the UK for a long time. Well, why would we do it otherwise?

As we were driving home Staffan said: "But I am only driving thirty". Yes, thirty miles.
Posted by Maria Nikolajeva at 18:34 No comments:

Email ThisBlogThis!Share to TwitterShare to FacebookShare to Pinterest
Labels: weird

I have opened the biking season. I think it is the first time ever I have biked on my own - apart from biking to work. But Staffan has a cold, and I felt I needed to get back in touch with my bike before I started using it daily again. It's a nice sunny day, and rather than walking along the river, I took my two-wheeled friend. Biking has some advantages over walking. The same distance is much shorter when you bike. I went twice as far almost without thinking about it. You feel superior to walkers and especially joggers. (I have never understood the point with jogging; seems an extreme form of masochism.) You feel you have deserved to sit down on a bench and enjoy the sun. I wish I had brought coffee, as I saw other people had done. On the other hand, you see less when you bike. Or at least I do. I am too focused on where I am going. I cannot stop to talk to a chaffinch as I did when I walked last weekend, because I am going too fast to notice a chaffinch. I register swans and ducks with my side sight. I cannot see whether the buds on the trees have become larger. I realize that I have totally missed the snowdrops I saw last week.

Yet both walking and biking feels superior to the gym, where I, after a long break, went last Thursday.
Posted by Maria Nikolajeva at 13:49 1 comment:

Email ThisBlogThis!Share to TwitterShare to FacebookShare to Pinterest
Labels: biking

This time of year we are getting loads of applications for graduate studies. More than half of our child lit masters are applying for PhD, which I guess means they are enjoying the course. I hope they all come in and we'll have a really strong seminar! But there is always a but. There are not many of us in child lit who can act as supervisors. And every student must have two supervisors. Besides, every student must have an advisor, apparently to settle the problems when the two supervisors disagree. Further, we must think strategically because four years from now the students will need examiners. The dilemma is whether to save someone for examiner rather than make them supervisors. So here we are, with a pile of applications, shuffling and reshuffling them and trying to match student, lead supervisor, co-supervisor, advisor, examiner - preferably taking into account our competence, interest and experience. I know it probably sounds trivial. But I cannot help thinking about the power we have. We are in fact deciding several people's fates for the coming years, maybe for the rest of their lives. Looking back, I realize that someone was one day sitting like this with my application.
Posted by Maria Nikolajeva at 20:22 No comments:

After snowstorms, we now have floods. The towpath where I walked last weekend is totally under water. All cars have disappeared from the parking by the river - Staffan has moved ours too. Since it is snowing again I guess the water will rise. So what else can we expect? Earthquakes? Tornados?
Posted by Maria Nikolajeva at 19:39 No comments:

Email ThisBlogThis!Share to TwitterShare to FacebookShare to Pinterest
Labels: weather

I am going to a reception tomorrow, and the invitation says "Lounge suit". My, isn't internet marvelous! I get drowned in the history of clothes, one article more fascinating than the other. And to think that I have lived my whole life without this essential knowledge. I own an evening gown that I have used twice, but otherwise I have always managed without going deeper into these very intricate details. Fortunately, there is a very easy guide. My only concern is: looking out of the window, I am not sure that the climate is temperate. But I won't test the option "cold" in case it means woollen underwear.
Posted by Maria Nikolajeva at 18:42 1 comment:

Staffan had better luck with the weather than I (or is it the other way round?) and went off to the old country without problems. Which left me with an unexpected weekend in solitude, or rather in Miso's lovely company. There are many ways of spending an unexpected weekend. You can be usefull and do all those chores that never get done and some that Staffan has been doing, so it's only fair to do them when he is away. You can be social and call some friends to see if they are free for lunch or tea. You can be intellectual and go to a movie or even a concert. (Just don't tell me I can read a book, that's work!). With all these marvelous options I decide to be useless. Yesterday I made 75 inch-by-inch floor tiles for the dollhouse. If you ask me why I do it when I can buy pretty self-adhesive floors, it's exactly because it is such a wonderfully useless pastime. I need about 300 tiles, so it will keep me busy for a while.

Yet another option is being healthy and go to the gym, which I have neglected for a long time now. But it is such a nice sunny day, although still cold, that I go for a walk instead. Being a goal-oriented person, I walk to the lock and back, watching the rowing boats and trying to avoid collision with their coaches on bikes, with whom I share the towpath. The path is muddy, and there are still patches of snow around. There are other people walking too. I return home feeling superior (to myself?) and even consider sitting down in the garden with my cup of tea, but I guess I'll have to wait another week or two.
Posted by Maria Nikolajeva at 14:33 No comments:

Why does it always has to happen to me?

Since Monday, the atmospheric conditions have been very unfavourable, as Owl expresses it in Winnie-the-Pooh. "The what?" asked Christopher Robin. "It has been snowing". British newspapers and websites carry instructions for making perfect snowballs, for the benefit of those lucky people who have never seen snow before.

I was going to Dublin this morning. Since airports had been closed now and then all week I emailed my conference hosts yesterday to warn that I might not be able to come. But this morning I checked Ryanair, I checked Stansted, and I even checked National Rail, who yesterday warned about possible delays, but this morning assured that all services ran normal. Since I always want to have good margins, I was at Stansted two hours before departure, stated happily that although some flights had indeed been cancelled, mine hadn't, and planted myself in a cafeteria with a cappuccino and my conference paper. (Actually, I had this little thought that if the flight were cancelled, I wouldn't have to give the paper, so there was no point in revising it, but it felt wrong to argue this way). In due time, the gate was announced - same procedure as every year, a long queue in front of the gate, a smaller one for priority boarding. Lots of announcements about change of gates and cancelled flights, not my flight though, not my... and - there it goes: 30-minute delay. The old lady beside me sits down cross-legged on the floor, and I do the same (incidentally, I am an old lady too, I keep forgetting it). Crowds of confused people running here and there. Hords of people attacking our gate, going somewhere else and informing us that the Dublin gate has been changed. The Dublin crowd moves across the hall and arranges itself in two considerably less organized queues. At last! We go on board, running from the gate to the parked aircraft under snow and sleet. We are only an hour and a half delayed, and although I won't make it to the opening of the conference, my paper is not until later this evening. Breathe out.

No? What? Dublin airport closed? And you have just learned about it?

Off we go, led through secret airport corridors marked "Toilets" (honestly!) to avoid UK border, through bagage claim and racing toward Ryanair ticket office. The queue is huge. I get a glimpse of the departure board to notice that there is a flight three hours later. I call the conference organizer to tell her that the flight has been cancelled, and that I will do what I can, although I have almost decided to go home. Fortunately, I don't have to make the decision. "Passengers wishing to go to Dublin should be aware that there are no seats available until Sunday". A young man behind me is calling other airlines on his mobile. A lady in front of me is crying over the phone because she obviously was going to Dublin for a funeral. And I call Staffan to tell him I am coming back.

My only consolation is that the queue behind me is ten times longer than when I first joined it.

Staffan is flying to Stockholm tomorrow. We'll see if he has better luck.

Email ThisBlogThis!Share to TwitterShare to FacebookShare to Pinterest
Labels: travel 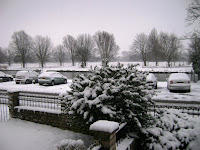 Schools are closed, flights canceled, buses don't run, and my employer advises us to stay at home. All this caused by three inches of snow. They say it hasn't been that much snow here in twenty years. I certainly hope that, statistically, there won't be another winter like this during my lifetime. Staffan says that if Sweden was paralyzed by such an amount of snow, it would be paralyzed for half a year.

I remember when we lived in Massachusetts and it snowed one morning. I didn't think much of it and sent Julia, nine years old, off to school as usual. She came back after fifteen minutes saying that the school bus never came and there wasn't a soul around. Looking out of the window, I saw her track of footprints. The rest was pristine snow. The university classes were cancelled too. I wished we had rules like that when I was a child - we'd stayed at home most of the winter.
Posted by Maria Nikolajeva at 15:40 2 comments: