This novel was among the very first books I read when I started learning Swedish. The reason was that I worked as an interpreter with a Swedish group, and on departure they gave me all the books they had with them. Why one of them brought Doctor Glas to Moscow as recreation reading is a mystery.


I had only studied Swedish for two years then, so I wonder how much I understood. I remembered the main point of the plot: a young doctor plans to murder an elderly priest who is married to a young woman. I had forgotten the details: that the young woman has a lover and that she comes to the doctor to help her avoid her marital duties. When I first read it, I made no connections to Dostoyevsky and Nieztsche, but now it was clear to me that Doctor Glas is the archetypal Super-Man. Unlike Raskolnikov, he does get away with the murder and doesn't even seem to regret it. But the novel is full of his reflections – it is written in a diary form. He is also a flâneur, and his flâneuries in central Stockholm are easy to trace, even though many landmarks have disappeared. When I first read the novel, they didn't mean anything to me, but now I felt the joy of recognition: my favourite walks, precisely.


And on my walk today, far away from Doctor Glas's paths, I saw this street sign. Tell me it was a coincidence. 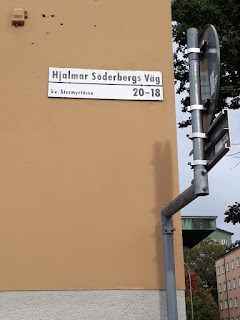 But Söderberg's literary sign is where his character liked to spend his evenings, Kungsträdgården. 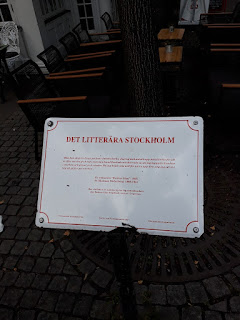 Posted by Maria Nikolajeva at 18:29