This week I am doing a virtual walk of Camino del Norte, a dream shattered by the current situation, but now scheduled for April 2021 so this will be a good preparation.


On the first day, we are strolling leisurely around in San Sebastian, place name that rings many bells, but I haven't been here before. The closest I have been is Pamplona, which is inland and already a different kind of place.


I have done some homework, learning to begin with that the correct name in Basque is Donostia, which is etymologically the same as San Sebastian. The city has a remarkable history, including being burnt to ashes by the British during Napoleonic war. It was the European capital of culture in 2016. Those of you who wonder why I am doing this virtual trip: why would I otherwise bother to learn facts about Donostia? The only incentive to learn something is when it's relevant.


Other interesting facts include that Donostia was the first city struck by influenza pandemic in 1918, and that it is the second in the world, after Kyoto, in the number of Michelin-starred restaurants per capita.


I have watched some videos about Donostia, including one on local food. As a part of my immersive experience, I have made pintxos. The proper way of having an evening meal in Donostia is to go on a pintxos bar crawl. I am going to four bars tonight: Sukaldea, Balkoi, Egongela and Logela. Now you have something to figure out. 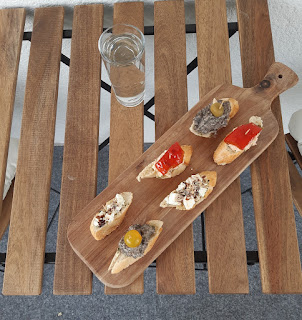 Posted by Maria Nikolajeva at 16:37