Read the first part of this travelogue here.

The main, if not the only reason I had chosen this trip was the Okavango Delta. As always, Attenborough is to blame, because those fabulous pictures of the delta made an indelible impression, and for many years I had been resentfully telling myself: “Well, this is surely one place you will never see”. So even though I had read the itinerary and the guidebook, the delta was the projected highlight for me, and everything else was a bonus. Sand dunes: fine, I have seen a sand dune in France, yes, it was huge. Game reserve: fine, I have spent a whole week in the Kruger park. Victoria Falls: nice, like Niagara, just bigger. But the Delta – I hadn't seen anything like that.

So when Anton said that the Namibian sand dunes had been his dream for ten years, I was surprised, not to say perplexed.

But let me relate it in correct order. We were picked up at our hotel at Windhoek by the same driver who had picked us up from the airport the day before. It turned out that he would just transport us, and three other travellers, to the meeting place with the rest of the group and the guide, 350 km south-west. The rest of the group – by serendipity or by design, a mix of Swedes and Danes - had already been travelling together for a week, driving all the way up from Cape Town through Kalahari desert.

The road from Windhoek was good, and we had two comfort stops at fuel stations that offered clean, nice facilities with toilet paper. Public toilets have always been a yardstick for me, and the toilets on the way from Windhoek made me feel safe. You could even get decent coffee. We stopped for a picnic lunch at a scenic spot, but otherwise no sights were pointed out, and we were at Sesriem camp some time in the afternoon – I had no clock, and for the coming weeks I lived outside linear time, measuring indefinite chunks between getting up – lunch – dinner – going to bed, which was just what my tired mind needed. I lost count of days; no dates, no days of the week, just Day 1, Day 2 and so on of the trip.

But: back to our first camp. We were as yet uninitiated in the routine and hadn't seen the huge truck that would be more or less our home for the next two weeks. 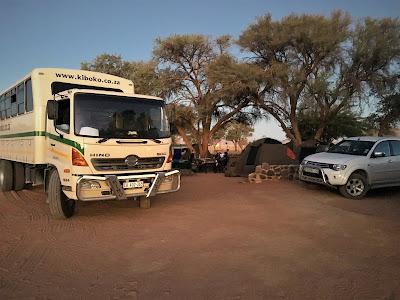 The other travellers were pitching tents. Everything was happening very fast because we were going to climb a dune to admire the sunset. I hardly had time to get my bearings. I am not a very good climber, and in the first place, I hate making people wait for me, so as everybody ran up easily on the sliding sand, I just told them to go ahead, I would tackle the effing dune at my own pace. Dumi, our guide, helpfully suggested that for each of us, wherever we got to was the top. I will remember these words of wisdom in other life situations as well. With hills, mountains, rocks and, apparently, dunes, every time you think you are there, you just find another hill, another rock, another dune above. That's me, climbing the dune. Looking at this picture, I feel insignificant. 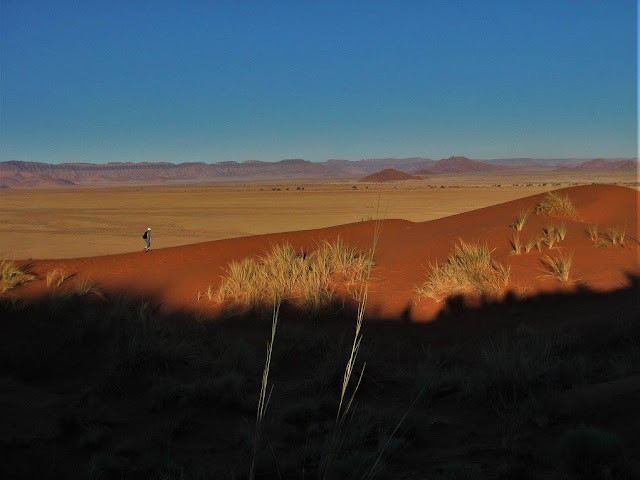 I missed the sunset, but who cares. It was pretty. I found my way down. 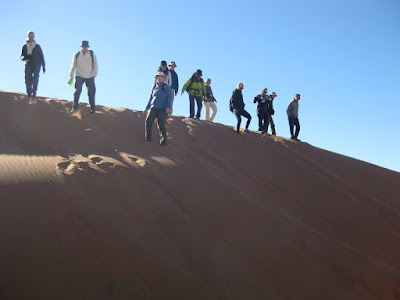 Back at the camp, we had a great meal from the braai, bringing back memories of South Africa, and suddenly it got very cold. The trip notes had warned about cold, and I was glad I had listened, because frankly it felt ridiculous packing a winter jacket when going to Africa. Our fellow travellers confirmed that some nights it had been below zero. 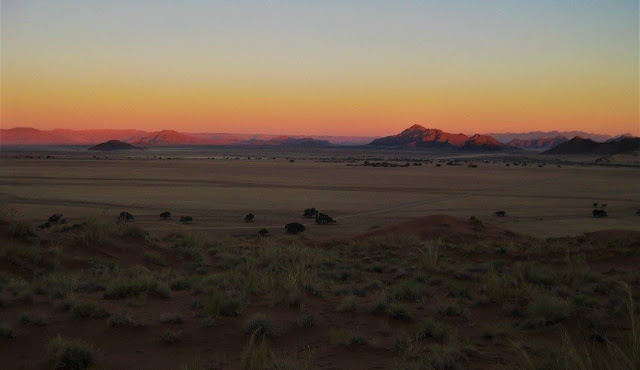 I was exhausted, physically, yes, but also emotionally. Here I was, alone in a tent, in African desert. Last time I had been in a tent was forty-five years ago when I went to an archeological dig. I had a camp bed, a mattress and a sleeping bag. I felt overwhelmed. Anton had generously given me his headtorch (I had discovered that my old one was broken the day before I left home). I put on three layers of clothes and crawled into the sleeping bag. Within five minutes, I was asleep. When I had to go out around midnight, a crescent moon lay leisurely on its back, and first then I felt I was where I wanted to be.

Flashforward: it took me several days to establish a routine for the night. One night, when I needed to go out, I couldn't find the torch and panicked, because it was pitch dark. Then I remembered that I had a torch in my phone, and I knew where my phone was, in the deepest pocket of my backpack. I found the backpack, I found the phone, I switched it on, I switched on the torch. After that, every night as I went to bed, I would lay out on a kerchief, in a strict order: clock, torch, glasses. Clock, torch, glasses.

The order was to sit in the bus at 5.45 because we had to drive an hour to some very special dune that we would climb to see the sunrise. I wonder what local people think about tourists' obsession with sunrises and sunsets. When we lived in San Diego we enjoyed our private sunsets every night for two years and never got tired of them. But otherwise, unless you live by the ocean – or in a desert – you rarely have a chance to watch sunsets, which makes them special. And undeniably, a sunrise over sand dunes is spectacular.
So, this particular Dune 45, appropriately called because it is 45 km from the camp, is designated for tourists to climb, as, the guidebook informs, it is the most accessible. Dumi had said that yesterday's climb was “easy” so I prepared to skip this one, but it was too tempting. Again, I let the fittest pass me and climbed in my tempo. This was truly a sand dune, just sand with a narrow ridge. Your feet sank in the sand, and I was scared to lose balance. (Anton said afterwards that, unlike a snow slope, in sand you would just fall and stop). I was going to give up every now and then, but persisted, and although I never made it to the top, the reward of the sunrise – not to mention breakfast on return – was great. 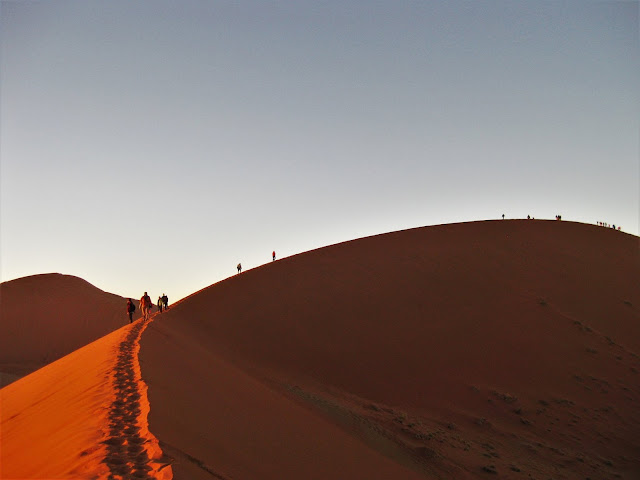 Anton was our designated photographer, so all pictures reflect his point of view. Here is our well deserved after-dune coffee. Note that we are in Africa, wearing winter clothes. 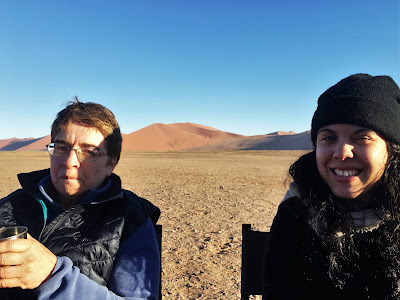 Another ten kilometres further into the dunes, and Dumi promised “an easy, flat walk, maybe with some small dunes” that I was looking forward to, but “easy and flat” is of course relative, as are “small dunes”. Doubtless, as compared to Dune 45, they were just tiny hills. 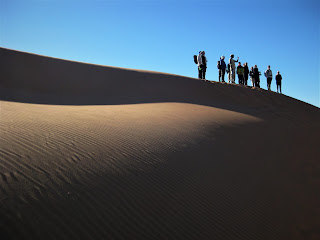 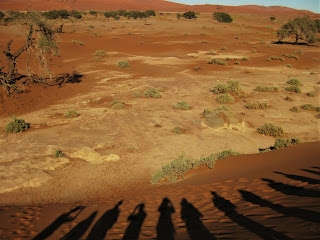 Eventually the group split, and the brave ones went to climb a REAL dune (second highest in the world!), while Kory and I and some others were told to walk around the dune. Now, “around” is also relative, and finally I realised that there would be a lot more climbing involved, and even the perspective of one of the most iconic views in Namibia, Deadvlei, wasn't tempting enough. I imagined having a heart attack halfway and decided to be sensible. It had also got very, very hot. I walked to the shuttle station and caught a ride back to our bus. Again, I had no idea what the time was and had no one to ask. I sat in the shade with a glorious view of the toilet, with oryx walking around, 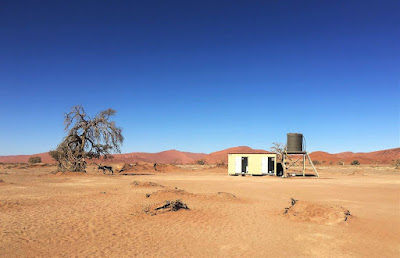 until my travel companions started returning – by shuttle as well, since no one had the stamina to walk back. Anton was blissful and said that he was ready to go home. I am sorry I missed Deadvlei as it was apparently stunning.

After a quick lunch by the bus, we went almost all the way back to the camp, watching all these magnificent dunes, now in full sunshine. We went to see a canyon which was amazing, but of course in a canyon you go down first and then have to climb up; however, it turned out I am a better canyon-climber than dune-climber. 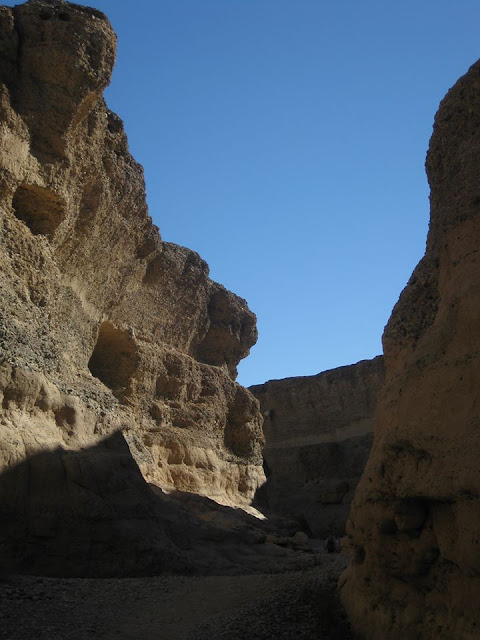 Still I was dead tired by the time we were back in camp. I put the mattress on the floor and lay with my feet up on the bed for a while. But it was good tiredness, and I was soon full of vigour again, and I even helped with preparing dinner. Dumi had said that the trip was “with full service”, but they wouldn't mind if we wanted to help. As a side comment, the food was fabulous all the way through. 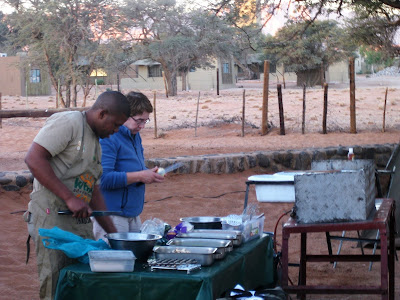 Back in the dark solitude of my tent, I had some deep philosophical reflections. Travel is not egoistic. By travelling and feeling happy we increase the general amount of happiness in the world and make it a better place. We share our happiness with other people – as I am doing now. But maybe it is a wrong way to think about it.

Here are some more pictures of the sand dunes, to make you happy: 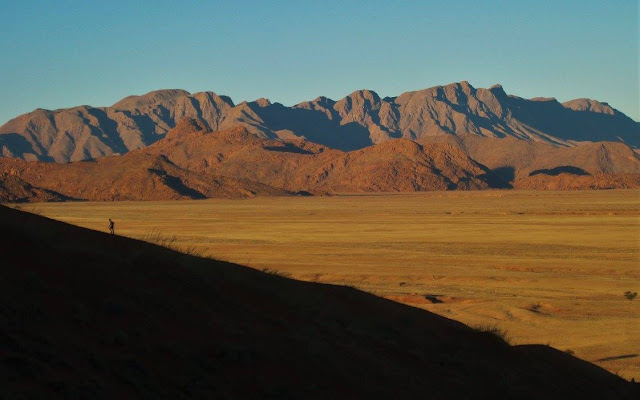 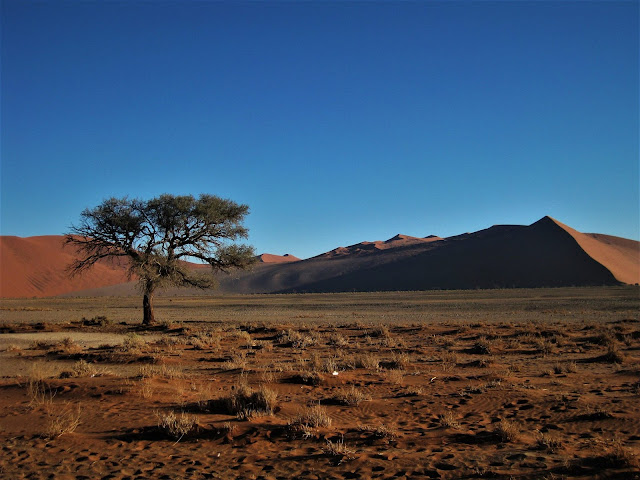 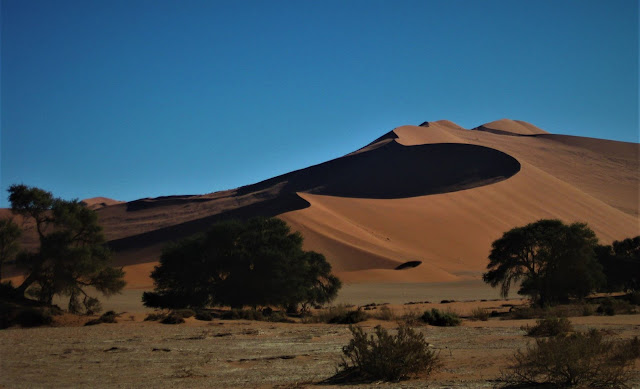 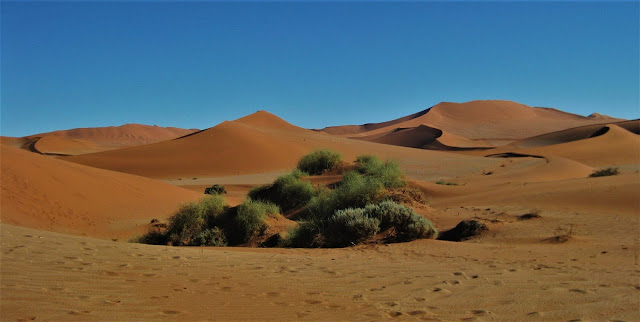 Posted by Maria Nikolajeva at 09:04