I haven't blogged for more than a year – not because my life has been totally uneventful, rather the other way round, and I never found time to catch up. But now I have just returned from the best trip ever (says someone who has travelled a lot), and I need not only to share it with friends, but sort and write down my impressions for myself, based on my diary notes, Anton's photos and fragments of memories. I say fragments, because already when I was re-reading my diary halfway through the trip, I noticed that I had forgotten details. There was so much, and such a variety of experience, that it is hard to know where to begin.

So I will begin in the beginning and go on until the end. Then I will stop.

Three years ago, after Madagascar experience, I thought I'd never venture into another long-haul trip, but fortunately strenuous travel is like childbirth: after a while you forget the pain and only remember the joy. About a year ago I saw a picture of the Okavango Delta, and suddenly felt that I was ready for another adventure. I was so much ready for another adventure that I wanted to do it there and then, only of course I need a travel companion, and nobody can go on a long-haul trip at short notice. My sense is always: do things now, what's the point of planning ahead, I may be dead by then; but on the other hand, I may not, and even if it's a year in advance, sooner or later the time will come. (Or not, but then it won't matter).

Anyway, I planted the idea, and Anton and Kory let themselves be persuaded. Kory had never been on a wildlife adventure, but after Anton's pictures and stories from Madagascar she was prepared to give it a try. We investigated various options, and Anton insisted on adding Victoria Falls. I booked the trip and hung it in front of me like a carrot: something to live for, something to look forward to. Eventually, flights had to be arranged, as well as all kinds of other things required for this type of travel, and as it was getting closer it felt less and less real, even though I read the Lonely Planet guidebook for Botswana and Namibia back and forth. Since I had very high expectations before Madagascar and was disappointed, I decided that I wouldn't have any expectations at all, for better and for worse. All I knew was that, unlike Madagascar, we would actually sleep in tents inside national parks, which would hopefully bring us closer to what we were seeking. I didn't want to think about how my back would respond to sleeping in tents; but I exercised every week and walked as much as I could.

Finally one day I had to pack my huge sports bag and my newly purchased backpack, and as I started looking at train timetable, I suddenly remembered carrying this very bag along the tunnels from King's Cross to the Tube, and I decided to go against my habit and take an airport coach. Which turned out to be a serendipitous decision because all trains between Cambridge and London were cancelled that day. Anton and Kory flew from Stockholm to Gatwick (that was my only condition: that we would fly together from London) and transferred to Heathrow, waiting for me and getting more and more nervous as I was stuck on M25, sending anxious texts – even though I, being me, had a wide margin. And then we were on the plane, and I slept peacefully through the night, and we had just about enough time in Johannesburg to run from one gate to the next. We landed in Windhoek, had our pictures taken by a heat-sensitive camera, went through passport control, our luggage didn't get lost, and there was someone to meet us and take us to our hotel. Almost too good to be true.

At that point, Anton and I agreed that we wouldn't compare Namibia to Madagascar, because the comparison wouldn't be fair. Madagascar is one of the poorest countries in the world. Namibia is one of the wealthiest countries in Africa. Of course we couldn't help comparing, and already the very first impressions were different. Windhoek was a modern city, nice and neat, with well-paved streets and traffic lights (Antananarivo, the capital of Madagascar, has a population of two million and not one single traffic light). Windhoek's population is 325,000. On the way from the airport we saw some baboons and an ostrich. The driver took us through the city centre, pointing out landmarks. I felt I liked the place.

We decided to stay awake as long as possible, although we were terribly tired, but the rooms were not ready, and the hotel was far away from the centre, with a courtesy shuttle once an hour. It felt completely unreal to sit there on a patio under palm trees, waiting for the shuttle and drinking guava juice. On the way from the airport I spotted a little street market, which we inspected, but didn't buy anything; we strolled along the main street, dropped into some shops; had a late lunch or early dinner; took the shuttle back to the hotel, and by four in the afternoon we were ready to go to bed.

I had read the itinerary, but I had rather vague idea about where we were going and why.

I am so ancient that when I went to school the countries were called South West Africa and Bechuanaland and South Rhodesia. I frequently hear from my British friends that they grew up somewhere in Africa, which the first twenty times sounded like they grew up in Narnia before I realised why it was so common. For them, Africa was a real place. But for me, in Moscow, Africa was totally abstract. It wasn't a high priority in our geography lessons, so the only reason I knew about these countries at all was my father's stamp collection. Otherwise “Africa” was in my childhood a magical country – one, homogeneous country – full of adventure and excitement, featured in numerous children's verses: 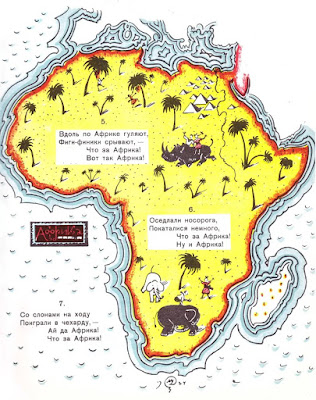 Or, in a Russian version of Dr Dolittle, a plea to come and save African baby animals, with a precise address:

We live in Zanzibar,
in Kalahari
and Sahara
where the hippo
walks along the Limpopo.

No wonder my geography was muddled.

Or, from a later date, my son's childhood:

If you walk along a road far enough
you will get to Africa.
In Africa, mountains are sooooo high.
In Africa, skies are sooooo wide.
Crocodiles, hippos,
monkeys, whales
and a green parrot...

Admit that the image of Africa conveyed through Russian children's literature is a bit skewed.

Since then I have been to South Africa three times, so I do have a more realistic view of that part of the world, and I know that the African continent is huge. But I knew very little – still know very little – about Namibia and Botswana. Here I was in Windhoek, a city I hadn't even heard of until we had to get our flights. It felt unreal. And yet it was happening. The next morning we were going on adventure.

I had decided that for the whole duration of the trip I would be off-line.

Posted by Maria Nikolajeva at 14:21