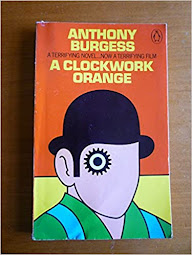 I am resuming my re-reading challenge after a long break as I was reading Hilary Mantel's The Mirror and the Light – slow read of many, many pages that took me over two months. Goodreads points out to me that I am behind schedule.

I included A Clockwork Orange in my list because it seemed an obvious choice, and now I cannot remember whether I read it before I saw the movie or after. I saw the movie in 1975 at the very earliest (a pirate black-and-white copy), and I haven't watched it since so I have just glimpses of episodes and no memory of whether the movie follows the novel. Not unexpectedly, what I remember is the worst scenes of violence and the worst scenes of Alex's therapy. I don't remember how the film ends, actually don't remember the rest of the plot after therapy. Likewise, my memory of the novel was extremely vague.

My current copy has a foreword, from which I learned that the novel was published in the USA without the final chapter and that the film was based on the American version.

Since I was prepared for the violence, it didn't shock me, and it is possibly less shocking because it is narrated by Alex matter-of-factly in his idiosyncratic language. I was much more disturbed by the moral and political messages which I find far two explicit and therefore less effective. Maybe it is the spirit of the early 1960s.

The most fascinating aspect of the novel is the language, much of which is obviously missing in the film. I haven't counted, but I would guess at 5 to 10 slang words per sentence, and I wonder how many make sense unless you know Russian. You can always figure out the meaning, but for me part of the joy of reading was recognising the Russian words cleverly disguised by English spelling and grammar. I am not referring to “gulliver” and “horrowshow”, but to much more subtle and imaginative usage. In some cases it took a few instances before I got it - “oddy knocky” was one, not straightforward to get from the context.

What Burgess and his critics perhaps didn't know is that at the time the novel was written, Russian nadsats, or teens, were actively using a similar kind of jargon where you not only needed the knowledge of English, but also a good deal of creativity. So you could hear phrases such as: “Я митингую с герлой в восемь клоков” (I am meeting a girl at 8 o'clock), ”У меня трузера штатские” (My trousers are from the USA) or ”Чилдренята, напутонивайте шузы” (Children, put on your shoes”), which is exactly the way Alex uses language. I have tested these examples on some Slavic scholars, and they didn't pass the test. I wonder whether Burgess would have passed it.

I got curious about how the novel was translated into Russian, and the translator used this very same kind of slang, spelling – and misspelling – English words in Cyrillic and inflecting them by Russian grammar. So Alex's droogy becomes his frendy, mesto becomes pleis, litso becomes feis, and deng becomes mani. No Russian reader today would have problems with this language, it is common currency.

Posted by Maria Nikolajeva at 14:11