Read the background for this blog series.
Read Part 1, Part 2 and Part 3. 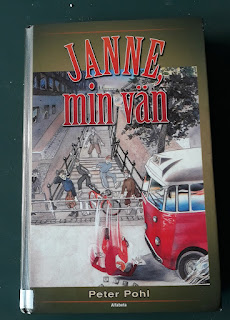 I first heard about this novel from a student who wanted to write his BA dissertation on it. A recently published book by a totally unknown author. I read it and was blown away. As were all critics and other children's literature people in Sweden.

Pohl, who otherwise was a university lecturer in numeric analysis, wrote the novel in a creative writing course, and rumours have it that it actually was the course instructor who wrote it. I don't really care, and it does happen that a first novel stays the best. Pohl never wrote anything better, and while some of his later books are good enough, most are typical “problem novels”. According to Pohl, Johnny, My Friend is a problem novel, so as usual authors have no idea about what they do.

I taught it in every children's and YA course in Sweden (even the one titled “The Origins of Harry Potter”) as well as in the courses I taught in California. Sadly, courses in Cambridge offered no opportunities to include translated texts. The novel was published in English by Aidan Chambers during his short-lived effort to bring some European YA fiction to Britain. The novel didn't sell, and most of the printrun ended up in Chambers' basement, from which I ordered copies for my American students, and after some US colleagues discovered this brilliant book, they ordered their copies as well. My Californian students didn't like it because they found too many “strange” details in it. I must add that for me the 1950s Stockholm setting, full of period-typical references, was also strange, but I am more tolerant toward strangeness than Californian undergrads.

Roberta Trites wrote a chapter on Johnny, My Friend for my edited collection Beyond Babar.

I only met Peter Pohl once – he wasn't keen on public appearances. On that rare occasion, he showed an amateur short movie he had made with his students. I have never been much interested in meeting authors, and I haven't got any signed copies of Johnny. My own paperback, full of margin notes and underlines, is in storage – one of the very few books I have kept. So I borrowed from a library. I was surprised that so few branches had copies, although I shouldn't have been. A couple of years ago, when I was revising my textbook on children's literature, I asked my Swedish colleagues whether Johnny was still taught in university courses, because it was very prominent in the previous editions. They said it wasn't. But they agreed that it was one of the best Swedish YA novels ever.

I hadn't re-read the book since I moved to Cambridge, although I had it in my shelf both in Swedish and in English. On re-reading now, I could state that I remembered the plot and most details well, even though you always notice something new on re-reading. I had forgotten that the narrator spends quite a long time discussing the penalistic system – one of the “problems” - in the famous elite high school in Stockholm in the 1950s.

What struck me now is the careful topography. The whole novel takes place within a few blocks on Södermalm – precisely the blocks where I live now. My street is mentioned several times; the temporal “now” of the novel takes place on the corner I pass daily. Of course I knew it then and pointed it out to my students, but I had never walked these streets before. My daughter went to the same secondary school as the protagonist (the school structure was different in the '50s, but the school was the same, “with traditions”, for better and for worse). But I used to drop her off and drive back home so I never took time to explore the setting.

I have now. I have walked every street, including the far away (15-minute walk) square where mysterious Johnny lives. There is no bike repair shop now, but there is a car repair shop, so it may be the same. The magnificent tree is never mentioned, probably because trees are of no interest for eleven-year-old boys. 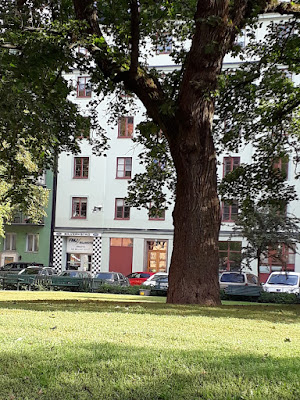 The novel is still piercing. It doesn't matter that I already know the answer to the mystery, but I could kill the person who reveals it on the title page. It's like revealing on the title page of a crime novel who the murderer is. I will point it out when I return the book to the library. 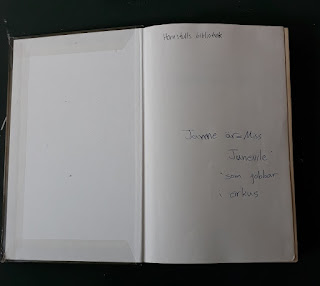 The library edition is from 2006, and there is an appendix, compiled by the author, of the '50s Södermalm slang. Apparently, teachers had asked him to do it, to make the novel more palatable for young readers. Perhaps the generation of teachers who could explain it to schoolchildren has died out. But it was already out of date when the book was published in 1985, and it was a deliberate artistic device.

Johnny is a good example of great books that get drowned in the flotsam of today's publishing. Fifty years from now it may be re-discovered and acknowledged again as the best Swedish YA novel ever. Yes, I mean it. Write to Aidan Chambers – he may have some copies left in his basement.

Peter Pohl's sign is appropriately on top of the steps at Kvarnsgatan where Johnny wins a crate of soda by biking down the steps - see cover image above. The bottom of the steps end in the street where I live. It is one of the first signs I noticed on my walks. 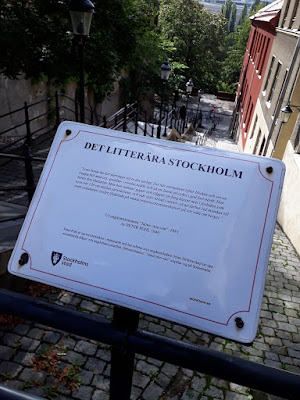 Posted by Maria Nikolajeva at 17:22