A long time ago, in my pre-previous life, I had a phone call from the Chairman of the Swedish Writers' Union, who was a friend. “We have an invitation from the Soviet Writers' Union to a conference on children's literature”, he said. “They want an author and a scholar. We asked the director of the Swedish Children's Books Institute first, but she couldn't. Would you like to go?” I would, for a number of reasons. I had not yet severed my umbilical cord with Moscow and took every chance to go back. But it was also important for me, a traitor as my former country viewed me, to be invited formally by a respectable organisation, as a guest of honour. “If so”, said the Chairman, “which author would you like to bring along?” “Gunnel Linde”, I said without hesitation.

I had read Gunnel Linde's books in Moscow, and when I came to Sweden I read everything by her. She was one of those great Swedish authors of the 1960s, the pioneers of the everyday, but imaginative, slightly mystical children's narratives. She was never as famous as Maria Gripe, and she never really got known internationally, even though some of her books are translated, and if you want to read one, read The White Stone.

I had met her at the Children's Book Institute annual parties, but I hadn't known her well, I just knew that she would be interested to go to Russia. And so we went. An truly unforgettable trip. Then we went again, when Gunnel invited me as her interpreter and guide on behalf of her organisation BRIS, “Children's Rights in Society”. She wanted to learn something from Russia that might be valuable for her work in Sweden. The UN Convention on the Rights of the Child had recently been declared, and Gunnel wanted to know how it was implemented in the country of the Communist paradise. As it turned out – and as I could have told her, but hadn't – nobody in the Soviet Union had seen the Convention. The people we met asked us to tell them as much as possible about it. The people we met were of the kind I had never met before. Directors of juvenile prisons, detention centres and orphanages. It was a degree of misery even I could not have imagined. Gunnel was in chock. In the evenings she and I and another person from BRIS would sit down with a tape recorder on and talk about what we had seen. We brought back pictures, stories and memories. That alone would have been enough to bond us forever. (This trip resulted in my charity work for Russian orphans and juvenile delinquents, but this is another story).

Gunnel had a peculiar endearment – I don't know whether she used it for other people, but she called me “My little cucumber”. Therefore I started calling her “My cucumber mum”. She had three daughers, so she wasn't desperate to have another one, but it just so happened. I was desperate to have a mum. We met often; sometimes she would come to my place for lunch, but more commonly I went to hers, and we would have long mother-daugher talks about everything in the world. At one point she said: “No one single person can give you everything you need. We choose someone who can give us most of what we need. The rest, we have to compensate with other people”. This was liberating, because I had always had high demands on people, with subsequent disappointments. Gunnel made it right.

One summer I was privileged to share her very special Ladies' Summer Club, a week at her country house with a couple of other writers and publishers whom I also knew. The main activity was reading aloud: your own work or anything, for instance, your favourite poetry. Emily Dickinson was highly ranked.

Gunnel wrote a wonderful poem for my fiftieth birthday and read it at dinner for my sixty guests. 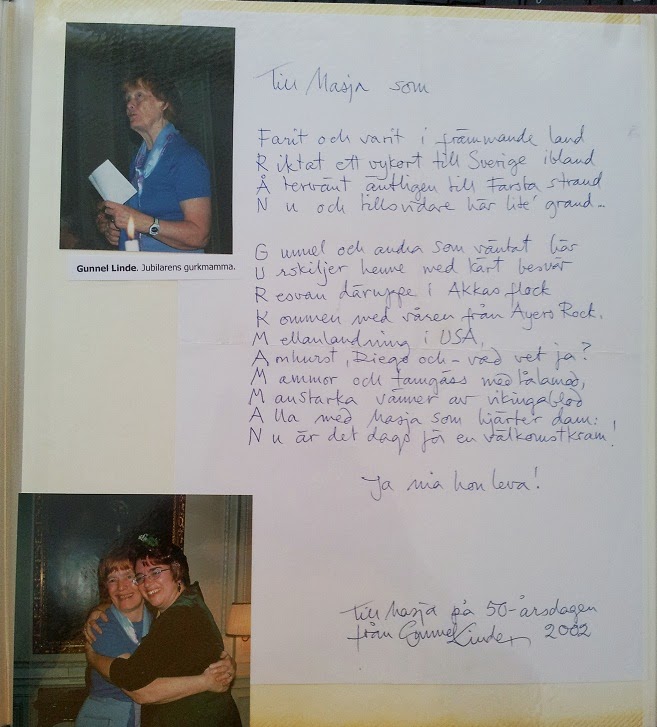 When I learned about her death this morning, I immediately felt a pang of bad conscience. Why didn't I visit her even once during my trips to Sweden these six years? I know that she had already drifted into lands beyond and would probably not have recognised me. No excuse. My cucumber mum is gone. May earth be as light as eiderdown over her.

Posted by Maria Nikolajeva at 21:44

Most remarkable and wonderful memories - a privilege to share them with you here! And how lucky I couldn´t go to Russia on that occasion... I miss Gunnel Linde too and remember a very rare person.